Kentuckians against gay marriage & abortion now realize...they voted against their own health insurance?

The liberal rational side of the issues have always had a hard time understanding Republicans who vote against their own best interest. We now have a glimpse into why. It all starts with “taking their country back” from the “Democrat” terrorists, who must be purged from the political process. Feeling cornered, conservative have no other choice than to vote Republican:


The 66 percent of Owsley County that gets health coverage through Medicaid now must reconcile itself with the 70 percent that voted for Republican Governor-elect Matt Bevin, who pledged to cut the state's Medicaid program and close the state-run Kynect health insurance exchange.

Crazy yes, but there's a reason behind the apparent madness:

Kentucky voters create ‘a big problem’ for themselves: We talked last week about a middle-aged Kentucky man who relies heavily on Medicaid expansion through the Affordable Care Act, but nevertheless voted for Gov.-elect Matt Bevin (R), who ran on a platform of destroying Medicaid expansion. “[I]t doesn’t look to me as if [Bevin] understands,” the man said, struggling with the consequences of his own vote. It’s a problem that apparently didn’t occur to him until after he backed the far-right candidate.

Lisa Botner, 36, belongs to both camps. Botner, a community college student, said “Just with the blood tests, you’re talking maybe $1,000 a year without insurance.” So why in the world would she support Bevin and vote to undermine her own interests? “I’m just a die-hard Republican,” the woman said.

The Herald-Leader article quoted a political scientist who crunched the numbers and found that the Kentucky counties most reliant on Medicaid expansion were also the most likely to vote for the candidate who vowed to tear down Medicaid expansion.

The following nails it:

Owsley County Judge-Executive Cale Turner responded, “To be honest with you, a lot of folks in Owsley County went to the polls and voted against gay marriage and abortion, and as a result, I’m afraid they voted away their health insurance.”

Conservative media had a big hand in it as well:

The community's largest-circulation newspaper, the Three Forks Tradition in Beattyville, did not say much about Kynect ahead of the election. Instead, its editorials roasted Obama and Hillary Clinton, gay marriage, Islam, "liberal race peddlers," "liberal media," black criminals and "the radical Black Lives Matter movement." "The people I talk to, health care wasn't even mentioned," said Gary Cornett, chairman of the Owsley County Republican Party.

When we saw the signs, "Keep government out of Medicaid," Republicans saw an exploitable hole you could drive a Mack truck through: 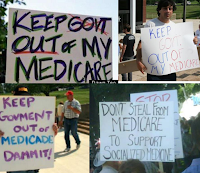 Transylvania University, political scientist Andrea Malji said she heard people back home denounce "Obamacare" while thousands rushed to sign up with Kynect. They didn't seem to realize that Kynect is the same thing as Obamacare.".

Medicaid and the survival of Rural Hospitals: This is a national problem:

In Alabama, where about a month ago, Gov. Robert Bentley (R) acknowledged something unexpected: he’s starting to see the benefits of Medicaid expansion through the Affordable Care Act. The Republican governor conceded that Alabama has been “realistic” and consider the future of rural hospitals. Georgia, which has struggled with rural hospitals closing because state Republicans refuse to consider Medicaid expansion, saw another facility announce last week it will permanently close in December – the “fifth rural Georgia hospital to shut its doors since 2013.”