Walker agenda exploits Fear and Xenephobia with ban on Syrian Refugees. What next protesters?

Scott Walker has turned Wisconsin into something so conservatively radical that that he truly believes the states remaining liberal Democrats are not much different than ISIS terrorists. Hey, Walker said so...


Audience member question: "Should you become commander and chief, how would you deal with threats like ISIS?"

Walker is unintentionally doubling down on that idea, despite his denials, with his recent ban on Syrian refugees. WSJ:


Gov. Scott Walker on Tuesday wrote U.S. Secretary of State John Kerry to say that state officials would not aid any federal attempt to resettle Syrian refugees in Wisconsin. "Our state will not facilitate the coordination or provision of benefits or services for individuals whose presence could pose a potential risk to our people." 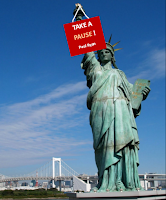 If Walker's statement wasn't enough, get a load of Paul Ryan's contradictory comment pushing the right wings xenophobic panic attack, while bragging about being a welcoming country to immigrants...just not this time. WKOW's Greg Neumann:


Paul Ryan: "Our nation has always been welcoming, but we cannot let terrorists take advantage of our compassion. This is a moment when it's better to be safe than to be sorry. So we think the prudent, the responsible thing is to take a pause, in this particular aspect of this refugee program, in order to verify terrorists aren't trying to infiltrate the refugee population."

Dumb Ron Johnson has the typical do-nothing GOP response down cold...we "have a lot of questions." Next issue please....


Ron Johnson, chairman of the Senate Homeland Security and Governmental Affairs Committee, said "Americans have a lot of questions" about the issue and "our first task is to keep Americans safe."

Add Walker to the other 31 frightened governors giving ISIS just what they want. Scared to death of challenging terrorist tactics, Walker could just be helping ISIS stop the flow of refugees with planted "evidence:" 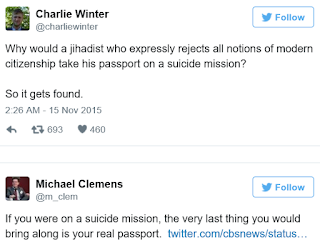 WaPo: Security concerns have increasingly been cited as a justification for keeping borders closed and refusing to resettle migrants ... after a Syrian passport with the name Ahmad al-Mohammad, a 25-year-old born in Idlib province, was found near the body of a suicide bomber. French authorities say fingerprints from the suicide bomber match those of someone who passed through Greece in early October.

Refugees and migrants reaching Europe do represent some kind of security threat However, it is not only deeply unfair to paint all of those arriving with the same brush — it is also self-defeating. If Muslim refugees come to Europe and are welcomed, it deeply undercuts the Islamic State's legitimacy.

Some have suggested that the Islamic State deliberately sent someone along this route to help sow discord. Given the availability of fake Syrian passports in Turkey and other places ... the passport found near the body of one of the Paris bombers was planted there to further inflame a tense Europe — an idea strengthened by reports that a different man was found traveling with the same passport in Serbia.

The anti-immigration right wingers like Scott Walker are only strengthening ISIS:


ACLU of Wisconsin was among the groups to criticize Walker's remarks Tuesday. The group said in a statementthat "the U.S. already has an extremely rigorous and multi-layered security screening program in place for refugees seeking to resettle here. Attempting to shut out refugee resettlement in Wisconsin blames refugees for the very terror they are fleeing, and erodes our own civil liberties," the group said.

Here's what Sen. Elizabeth Warren had to say about a fear mongering GOP leaders:


“These events test us. It is easy to proclaim that we are tough and brave and good-hearted when threats feel far away -- but when those threats loom large and close by, our actions will strip away our tough talk and reveal who we really are."

"We face a choice. A choice either to lead the world by example or to turn our backs to the threats and the suffering around us.”

Voxdotcom put out this nice piece on the conflict in Syria and the rise of ISIS. It offers Republicans food for thought...I'm kidding of course, that's not possible. The reality; we don't control what other countries do or end up creating due to their own policies, not including our own constant meddling:


La Opinión -- one of the leading Latino daily newspapers in the U.S. -- also noted that "[t]his type of reaction does nothing but feed internal fears, granting a victory to terrorists, whose goal is precisely to shake the feeling of safety in free societies":


"The Paris attacks carried out by ISIS are being used to sustain the Republican Party's nativist, anti-immigrant discourse. It is sad to see that the reaction to terrorism is to build border walls and ignore a humanitarian crisis out of fear. Terrorism triumphs when it succeeds in intimidating governments and civilians. Leadership is shown by rising to challenges posed by the situation, not by taking advantage of them to feed existing fear and resentment against immigrants and foreigners among the electorate."