UPDATE- Saturday: The rate increase was reduced, and that's a good thing.

That's still an increase. But something else was encouraging, probably due to the fact Wisconsin is getting national attention as an outlier in discouraging green energy:

But rates were lowered because the utility, unfortunately, saved money cutting 182 jobs in the Green Bay area:

Savings were found primarily thanks to the low price of natural gas burned in utility power plants, The commission trimmed $11.3 million in expenses in light of recent job cuts in Green Bay announced by the utility's parent company. WEC Energy said this month that it eliminated 2% of its workforce, with cuts taking place at its operating headquarters in Green Bay, Milwaukee and Chicago.

The scary thing about conservative voters is that they never seem to get confused over confusing GOP policies. Maybe that's the disconnect between our two ideologies. Yet some of this stuff is ridiculously obvious.

An Energy Rate Hike vs An Energy Rate Hike...huh? Scott Walker and his AG lapdog Brad Schimel (oh boy did we see that coming), said they're suing the Obama administration over the new carbon emission rules because consumers would be hit hard by rate increases. jsonline:

The states say the rules will heap higher costs on consumers and business … require new plants to use expensive and unproven technology, said Schimel, a Republican.


Walker: "The Obama administration ignored the concerns submitted by Wisconsin ... instead pursuing a political agenda that will increase costs and prevent the construction of future power plants producing reliable, affordable electricity for our state."


No Really, Walker doesn't care about Increased Energy Costs: It's hard to watch Walker's manic support for one dying industry (coal), and support for reviving a depleted, stagnant automated industry (manufacturing). But wasting taxpayer money suing the government in the name of keeping consumer energy price down isn't just foolish, it's also a Walker lie.

Walker, not Obama, is about to increase energy costs again on Wisconsinites when his own GOP dominated PSC, approves a rate hike just last year. What, no complaining or lawsuits? 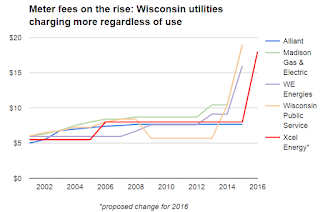 A year after receiving an 83% increase in the fixed customer charge on monthly electric bills, Wisconsin Public Service Corp. is seeking another increase in that fee — this time by an additional 32%.

Wisconsin has become an outlier on fixed charges based on what utility regulators have approved around the country. A review of decisions in other states by Renew Wisconsin found that 35 utilities proposed to increase their fixed charges ... Of those, 14 utilities were required to keep the charges unchanged, while 18 were allowed increases between 1 cent and $4.30 a month. The biggest increases were the three in Wisconsin, ranging from $6.83 to $8.71. "Only in Wisconsin have large increases been granted," said Tyler Huebner, executive director of Renew Wisconsin, a renewable energy advocacy group.

So cry me a river Scott Walker and Brad Schimel, about rate hikes under the new EPA standards.

Walker stacked the Public Service Commission deck so they could stuff the fossil fuel energy industry pockets with money:


The current chair is Ellen Nowak ... was the chief of staff to Waukesha County Executive … the legal counsel to the Speaker of the Wisconsin Assembly … deputy director of School Choice Wisconsin … practiced business litigation at Mallery & Zimmerman, SC in Milwaukee.

Keeping Seniors in their Homes? More BS: Walker's plundering Republican pirates say they're helping seniors stay in their homes by saving them a laughable $1 on their property taxes. But those same Republicans are forcing seniors to spend that dollar and $7 more on their energy bills. Oh wait, even that wasn't enough?

If approved, the fixed charge paid by WPS customers will have more than doubled since last year, from $10.40 to $25 a month, Patricia Finder-Stone of AARP said during a public hearing on the Green Bay utility's proposal.

"It makes consumers pay more before they even turn on their lights," she said. "This increase has a disproportionate effect on seniors and others that are living on limited or fixed incomes."

Thanks to Obama-derangement syndrome: "Stand with Walker" voters can not only delight in getting bigger energy bills now, but they can also sleep comfortably knowing their sue happy state government will be locked in the coal fired past for some time. I also found the graph below that I just had to post here. The wonders of coal: