"It's unfortunate that all too often we've seen from people like Hillary Clinton a political reaction to something that's much more sophisticated and challenging than that. The common thread we see in many of these cases is a failure in the system to help someone who is suffering from mental illness."

Myth Busting: Republicans have refused to support a bill that supports veterans that treats mental illness...:

WKOW: Democratic state legislators are looking for Republican support on a bill that would authorize the Wisconsin Department of Veterans Affairs (WDVA) to provide health care aid to military veterans for mental illness or substance abuse counseling.

The money is there as a stop gap for veterans until the VA processing is complete:


The idea is to give those who need mental health services a voucher so they can go get em, until the VA finds some time to schedule them on their own" ... according to a report from the U.S. Government Accountability Office released October 29, veterans are still waiting an average of 26 days to get an appointment for treatment or counseling through the U.S Department of Veterans Affairs.

While Republicans try to humiliate food stamp recipients with photo IDs and cut the jobless off of their unemployment benefits (big business doesn't like paying into the fund), it appears veterans just aren't a priority...this session:


Due to its recent introduction it won't be possible to get it passed during the fall session.
"We dealt with this on the (Joint) Finance Committee back in April where the Republicans said - 'for the most part it looks like a good idea, but we need more time to review.' Well, here we are, the beginning of November," said Sen. Erpenbach.

Oh, and how can Republicans explain away this jaw dropping list of non-support: 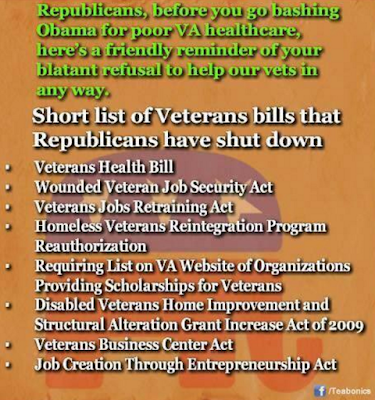