Republican candidates running for president should be embarrassed...but they're not. They not only want dictatorial control over their public image and message, devoid of tough questions on policy effecting all of us, but they also want us to go along with it. A line out of "1984" says it all:


The Party "seeks power entirely for its own sake. It is not interested in the good of others; it is interested solely in power."[4]

It should be noted the Democrats aren't trying to manipulate the networks format, not because the media is supposedly liberal, but because it's dangerous to our system of government, silly and self-serving.

Not even the lunatic rantings of RNC Chair Reince Priebus was extreme enough for these bullies from striking out on their own:


AP: Republican presidential candidates have agreed on a series of demands to give them greater control of debates … Representatives from more than a dozen campaigns emerged from a closed-door meeting…


1. (They) agreed to several changes largely bypassing the RNC in coordinating with network hosts.

3. An equal number of questions for the candidates.

4. And pre-approval of on-screen graphics.

According to the seemingly sedated and sleepy eye'd candidate Ben Carson, controlling images, messaging and questions will finally give American voters a more "mature" form of democracy and debate, whatever the hell that means: 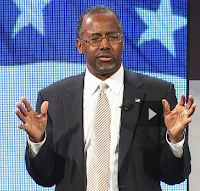 "We need to mature in the way that we do these debates if they're going to be useful to the American people," Carson told ABC's "This Week."

The changes were agreed to by a cordial group of right wing authoritarians, the nicest kind?

"The amazing part for me was how friendly the meeting was," Bennett said, noting the gathering was held in a room marked "family meeting." ''Everybody was cordial. We all agreed we need to have these meetings more regularly."

Just more liberal whining on my part, or...:


New Jersey Gov. Chris Christie distanced himself from the new demands. "Do not count me in the group that's doing this moaning and complaining about this … The presidency is almost never scripted, so we shouldn't have these debates scripted, either."