Nothing says "moral bankruptcy" more than the Republican audiences booing over the idea we would protect retirees life savings from another Wall Street Banks collapse. Have we become so cold and callous we now value "philosophical concerns" - small government and deregulation - that we're okay with plunging Americans into poverty due to greed and irresponsible Wall St. banks?

Apparently yes. Business Insider took a look at pollster Frank Luntz's crowd reaction to Gov. John Kasich's defense of saving families from losing it all, especially for something as bizarre as "philosophical concerns:" 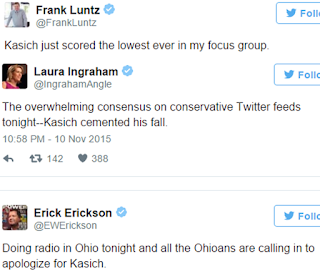 Kasich aggressively defended his position that he would bail out banks in the event of a potential financial collapse. Kasich was interrupted by a booing audience after he criticized Sen. Ted Cruz (R-Texas) …


“When a bank is going under and people are going to lose their life savings, you don’t say you have to deal with philosophical concerns. Philosophy doesn’t work when you run something.”

Truly jaw dropping. But Cruz and Carly Fiorina seemed to care more about the closing of smaller banks than recovering the public's money. Just a reminder; those smaller banks closed because of their own risky loans; and because Americans made a consumer decision to go elsewhere, like their local credit unions. The banks burned us and the public acted accordingly.