Fear of eating CWD-tainted venison initially scared many hunters and made owners of hunting land in southern Wisconsin concerned that their property would lose value if the hunt died off, said Jeff Schinkten, national president of Whitetails Unlimited.

But instead of fighting the disease like neighboring states, Scott Walker hired a Deer Czar who couldn’t wait to play down the threat with massive defunding and anti-science opinions.

Hoping people would forget about CWD and deer hunt again, Walker hopes hunting enthusiasts will soon be placing diseased meat on the tables of unsuspecting Wisconsinites. And it could be working. Republicans are now doing “at least some testing,” you know, going through the motions. And without in-person registration and testing, they’re thinking the problem will just go away: 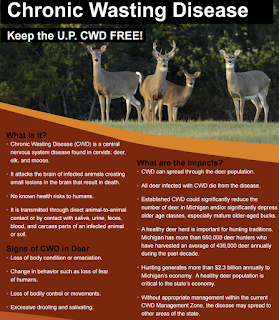 Wisconsin is taking steps this year to continue at least some testing to keep tabs on a deadly disease that is spreading through the state’s deer herd, even though hunters no longer need to bring carcasses in for registration. But the number of tests is dwindling while prevalence of chronic wasting disease in Wisconsin grows and neighboring states fight to control it, the DNR has half the CWD testing budget it had last year and enough resources to analyze tissue from 4,000 carcasses, down from 7,500 last year, said Tami Ryan, the agency’s wildlife health section chief.

Scott Walker's anti-science movement within the DNR resulted from feedback by "unhappy" hunters who never got deer. Of course the disease might have killed a few of them...


The state is following wishes expressed by the public in dozens of forums since the disease was discovered near Mount Horeb in 2002 ... "then monitoring and now not monitoring but doing surveillance to give the information to hunters who want it,” Ryan said.

And like everything else reeling out of control in Republican states, the best solution is no solution:

Last year the DNR stopped using the term “CWD management zone” for the southern Wisconsin region encompassing the worst infestations. “In the absence of having any management strategies or tools to deal with it, it is basically an endemic area,” Ryan said. “We know it’s there and it’s not likely to go away. That’s what endemic means: It’s here to stay.”

How does that sound hunters? Real hands on American know how at work.


“It is going to spread further and further out and eventually have an impact on the number of deer in the state,” said George Meyer, a former DNR secretary “What is really troubling to me is that the biologists in the department know this is the case but they are not allowed to talk about it and not allowed to bring forth proactive measures to deal with it.”

Read the following and weep sports men and women, this is how Republicans manage a state's tourism and sporting economy:

CWD prevalence in the Wisconsin has doubled since the state became less aggressive in 2007, while in Illinois, where officials continued to reduce the herd in diseased areas, there has been no increase.

The agency will solicit samples at only two locations in southern Wisconsin ... down from between 15 and 20 locations in recent years ... Plans also call for staff members to collect samples from about 10 venison processors ... Current budgeting is in line with the simpler and more passive stance recommended by James Kroll, a Texas wildlife biologist chosen by Gov. Scott Walker in 2011 to find ways the state could mollify hunters who blamed the DNR when they didn’t bag a deer.

The number of samples testing positive for CWD ballooned from 219 in 2010 to 331 last year even though fewer samples are being analyzed. Near the boundary between Dane and Iowa counties the prevalence of CWD in male deer has increased to over 25 percent from about 9 percent in 2002, the DNR estimates.