Republicans to allow babies and kids of any age to carry a gun hunting with their "responsible" mentors.

Parents were always quick to remind their kids, "just because you can doesn't mean you should."

Those days are gone with our defiant juvenile playground bullies in charge of state. That advice was apparently a parental wrong they're now determined to make right. They're in charge, and no ones around now to take away their toys...guns.

Okay, I'm gonna say it again just for grins...this time I think, even conservative voters will have had enough? I can dream: 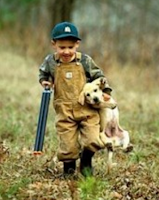 Mentored hunting: Senate Bill 301 would eliminate the minimum age for hunters in the state's mentored hunting program. It would also allow multiple weapons to be used during a mentored hunt, effectively allowing the mentor to hunt alongside the novice.

Current law requires mentored hunters to be at least 10 years old and allows only one weapon be used.

Yes, the adults in the state are of course stunned by this unexpected irrationality:

The Wisconsin Wildlife Federation issued the first official reaction to the bill. It is strongly in opposition, said Ralph Fritsch, a WWF member from Townsend.  "The program was designed well and has been very safe with the 10 age limit and only one weapon," Fritsch said. "There is no need to change it, and possibly a big risk if you do. We feel it is irresponsible." The WWF board of directors voted unanimously.