Ben Carson will change the way we see the country...literally.

I don't know what conservative voters are thinking, if they're thinking, when they blather on about Ben Carson.

Case in point, this amazing campaign moment (yes, another one):

Happy Geography Awareness Week! Ben Carson's presidential campaign inadvertently underscored this point Tuesday night, when it took to social media to share a map of the United States in which five New England states were placed in the wrong location. 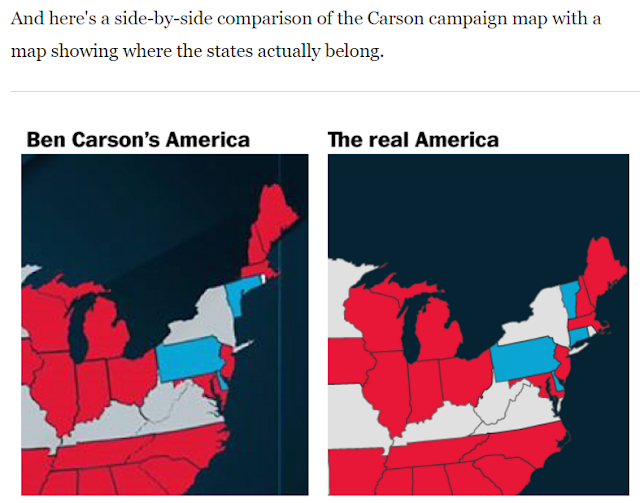 As you can see, in Carson's map the states of Connecticut, Rhode Island, Massachusetts, New Hampshire and Maine are moved northeast by about 150 miles or so. Vermont and New York now have hundreds of miles of new beachfront property. Massachusetts shares a border with Canada. Maine straddles what is now the Gulf of Saint Lawrence.

Also, if you look closely at the mid-Atlantic area, you'll see that Virginia's portion of the Delmarva Peninsula is colored red to match Maryland, rather than gray with the rest of Virginia.