Xenophobic GOP Presidential hopefuls want to screen out and welcome Syrian Christians only.


Sen. Ted Cruz: "There is no meaningful risk of Christians committing acts of terror. If there were a group of radical Christians pledging to murder anyone who had a different religious view than they, we would have a different national security situation."

Even though it received almost no coverage yesterday, Jeb Bush's comment about identifying Christian refugees stands out as one of the most scary and embarrassing positions yet. Remember, this is an "adult" running for president:


Reporter: "So what does the focus on Christian families actually look like?"

Bush: "I think you can prove it, if you can't prove it than you know...you err on the side of caution."

And of course there's always xenophobic Donald Trump with his more tempered approach: 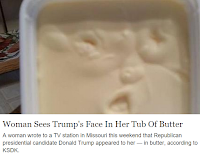 
Trump: "Refugees are pouring into our great country from Syria, and we don't even know who they are. They could be ISIS, they could be anybody. What's our president doing, is he insane?

But when I used the term "radical Christian" on my conservative friend in Milwaukee, he blew up, justifying past Christian killings.