It was almost impossible to know from media stories what really happened after local Arcadia Wisconsin voters successfully recalled their 10 year sitting mayor. I had to read through a half dozen stories to piece together the evidence. Suffice it to say, Mayor John Kimmel was a dictatorial right wing loon. 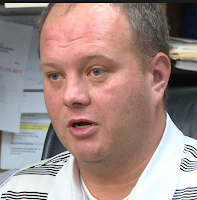 The recall process was filed by Duane Matelski, who claims Kimmel limits input from the public and experts who do not support his positions.

In response, Kimmel has said the recall effort is a fraud, and those behind it have a personal vendetta against him.

Yup, another Republican "victim," unable to accept responsibility for his own actions.

His ouster may not indicate a trend, but in your typical rural frac sand mining community, residents may have had enough of the corporate free-for-all to plunder their local environment, risk their health, and reduce property values.

When you look at Mayor Kimmel’s lopsided loss, it’s clear this guy wasn't just in his own clueless world, but had it coming.

Longtime Arcadia Mayor John Kimmel was ousted Tuesday in a special election triggered by frac sand complaints, but driven by ongoing discontent in the city over Kimmel's tenure. Rob Reichwein, a Trempealeau County supervisor, won with almost 70 percent of the votes.

The petitioners against Kimmel … expressed concern that Kimmel didn’t allow enough input at public meetings, didn’t work closely with residents about various concerns regarding frac sand and other issues, and wasn’t a responsible steward of the city’s resources.

Right wing Authoritarian Record: In our now deep red state, Kimmel assumed he could do anything. Residents were unimpressed.

Back in September 2011, Kimmel was suspected, but cleared of misusing Arcadia funds for a trip to D.C. to attend a rally for the American Public Power Association, a supposed non-partisan group opposed to “the proposed emissions guidelines for carbon dioxide (CO2) emissions from existing fossil fuel-fired power plants.” Add to that the following...


In 2006 Kimmel had proposed four ordinances:

3. forbidding any other nation's flag from display without an American flag alongside;

4. and ensuring that all signs and city documents be printed only in English.

No surprise, he backed away from his wacky right wing proposals after a public backlash...again.

Need another reason to have a statewide Democratic campaign to replace our "wrong direction" Republicans?
Posted by John Peterson, Democurmudgeon at 11/25/2015 01:08:00 PM