The only thing Higher than Taxes in Wisconsin is the amount of GOP Bulls**t about it!

We're a high tax and spend state; so cut taxes, cut spending, right? Wrong, and just another example of the Republicans well crafted deception to rile up the liberty loving voting base of "freeloaders."

If you average in fees and other charges Wisconsinites pay out of pocket, we're in the middle of the pack of 50 states. I'm assuming the Republican "accountant caucus" will correct this oversight:

The Wisconsin Budget Project detailed this in the recent issue of Urban Milwaukee: 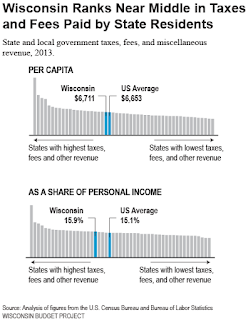 Some policymakers focus on Wisconsin’s ranking on taxes alone when evaluating its revenue compared to other states. But focusing just on taxes means that fees and other charges, which come from residents’ pockets much like taxes do, are not taken into account. Combining taxes with fees and other revenue gives a broader and more complete measure of the money that state and local governments in Wisconsin collect from their residents.

Wisconsin ranked 21st out of the 50 states in the amount of state and local taxes, fees, and other revenue collected per person in fiscal year 2013. Measured as a share of personal income, Wisconsin ranks 19th among the states in taxes, fees, and miscellaneous revenue ... because per capita income in Wisconsin is well below the national average, we typically rank higher when revenue and spending are measured on that basis.

So cutting taxes while increasing the fees is just another con mans shell game, all to impress the gullible dupes ready to buying into their "magic," that they've lower taxes.


Additional tax cuts could jeopardize Wisconsin’s public investments in high-quality education and health care, and make it more difficult to invest in public safety and transportation in our communities. That would hurt our economy in the long run, since those are the very things our businesses and families need to thrive.

Republicans say they're lowering taxes for future generations. Nope, just the opposite. Our kids will have to raise taxes, at a time when wages are declining and jobs pay less.
Posted by John Peterson, Democurmudgeon at 11/05/2015 01:49:00 PM