Walker's losses mounting up, Tyson Foods in Jefferson is leaving too, shedding 400 workers.


The Wisconsin National Guard will be shutting down units in Chippewa Falls and Hayward by 2017 as part of a national reduction … calls for eliminating 36 full-time positions and 274 traditional Guard positions in the state by 2017, trimming the state’s Guard by about 3.6 percent.

Add to that Scott Walker's magical jobs and business creation machine, the Wisconsin Economic Development Corporation, where it continues to do everything wrong:


AP: Johnson Controls Inc. plans to cut 277 jobs when it consolidates an office in Glendale ... 114 workers will lose their jobs in late January. Another 163 will lose their jobs between February and the end of June ... The center is one of four the company operates around the world. The others will remain in operation and are located in China, Mexico and Slovakia.

While all this was happening, Scott Walker got a brand new job,  a reward for what he's done in Wisconsin:

Impressive only if failure was the best thing you were good at. What in gods name is going on? 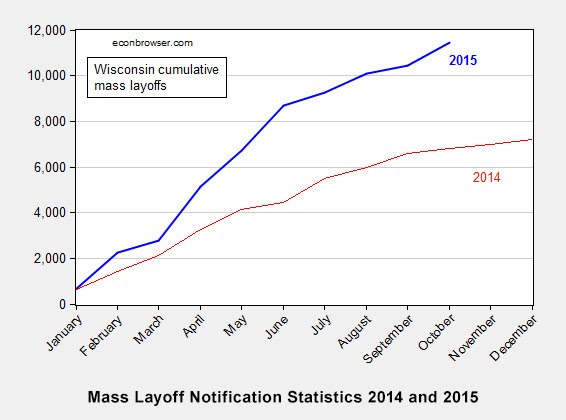 The Oscar Mayer plant closure in Madison and the loss of over 1000 good jobs.

Nearly 500 Enbridge Energy workers in Canada and the United States were laid off, including employees in the Superior area. MetalTek International, in Waukesha cut 13% of its workforce last week ... 60 employees.

In October, Milwaukee-based Harley-Davidson announced it would cut 250 salaried positions. In September, General Electric sliced 350 jobs in Waukesha. HyPro of Whitewater is laying off 62. In Janesville, Data Dimensions cut 120 workers and Grainger laid off 20.

According to Citizen Action:


Wisconsin will have lost more than 10,000 jobs in mass layoffs by the end of the year. There are no easy solutions to fix Wisconsin's economic woes. However, it is clear what we are doing is not working and we must change paths.

WEDC, Governor Walker’s discredited jobs agency, mistakenly assumes that giving aid to well-connected corporations will trickle down to workers. Wisconsin’s declining economic vitality is rooted in the failure of our political and business leaders to develop a serious strategy for expanding economic opportunity.