Yes, Republicans want to sell arms Terrorists in US!!!

When you summarize a failure like banning the sale of guns to terrorists, you can see just how radical Republicans have become, and mindlessly beholden to the wacky NRA. 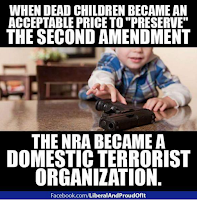 Democrats are renewing calls for Congress to pass legislation aimed at preventing terrorists from buying guns. Similar bills — including a post-9/11 measure backed by the Justice Department under Republican President George W. Bush — have been stymied for years, thanks in large part to opposition from gun-rights groups and congressional Republicans.

Yes, our frightened party of armed panicky paranoids have been arming terrorists for years and no one knew, especially those brainy tea party dunces.


According to a March analysis by the Government Accountability Office, people on the FBI's consolidated Terrorist Watchlist successfully passed the background check required to purchase firearms more than 90 percent of the time, with more than 2,043 approvals between 2004 and 2014. The office is an investigative branch of Congress.

I guess it fits into the current narrative, that any gun law is worthless, since terrorists and criminals will find a way to get fire arms anyway. So what's the use?

Seriously, this new bill fine tunes the ban on gun sales to terrorists, and it's still expected to fail to get the votes in the Republican Senate and House: 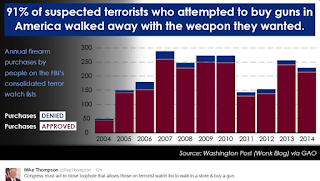 The new Democratic push would let the attorney general compile a list of known and suspected terrorists. Federally licensed gun dealers would be barred from selling firearms to them if government officials believed they might use the weapon for terrorism.

Again, inept Republicans want to reassess and discuss it, you know, talk about it for awhile, until we forget about it completely. Now that's governing with courage and leadership:


House Speaker Paul Ryan, R-Wis., did not respond directly when asked Thursday if he favored barring people on the watch list from buying guns, saying, "We are just beginning this process of reassessing all of our security stances."

The fact that the new Democratic proposal is a fined tune list of suspected terrorist, and not just those many people on the "watch list," the NRA wants to misdirect and anger members by accusing the Dems of exploiting the Paris attacks:


The National Rifle Association signaled this week it will oppose Feinstein's bill, as it did those before it … "It is appalling that anti-gun politicians are exploiting the Paris terrorist attacks to push their gun-control agenda and distract from President Obama's failed foreign policy."