Meddling where no idiot ideologue should meddle, Sen. Duey Stroebel is forging ahead with his big government takeover of local referendums. Here's what he wants to see happen:

A Republican bill in the State Senate would require school boards to hold referendums during traditional fall and spring elections. It would also prevent school boards from going back to voters for two years following a referendum’s rejection. Senator Duey Stroebel says his proposal protects taxpayers and restores integrity in the referendum process.

But he's also play tricks on parents and school districts, who will fall victim to his little con...and there won't be a thing they can do about it. Urban Milwaukee:

Currently, school districts have significant flexibility in when they ask voters to approve new resources. Some lawmakers are seeking to reduce that flexibility, by requiring districts to wait at least 730 days – two years – after an unsuccessful referendum to put another referendum before voters.

The combination ... could be forced to wait as long as three years after an unsuccessful referendum to attempt another. For example, a school district that held an unsuccessful referendum in 2015 would be required to wait until 2018 to hold another one if the restrictions had been in place. That’s because only 729 days pass between the April 2015 election and the April 2017 election – just shy of the 730 day requirement – and there is no fall election in 2017, pushing the next potential referendum election into 2018. 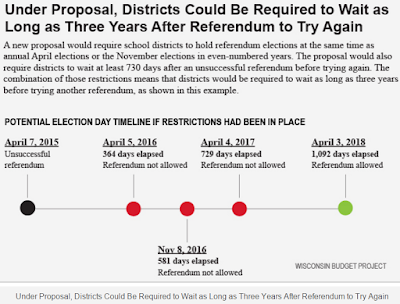