And to prove how dumb the media has been about how it covers health insurance, not actual health care, the following "no sh**" headline appeared in the Financial Times:

It's dumb because that's what the individual market had been selling for nearly two decades, well before "ObamaCare," Pushed mainly by Republicans as the answer to lowering monthly premiums in a "free market" system, high deductible plans forced people to self ration, discouraging sick people from "over-consuming" on their treatments. You know, like when we spend too much on treating life threatening cancer or heart disease.


You may have heard of Health Savings Accounts (HSA)? They've been around for years. That's a tax deductible account consumers use to pay down part of their catastrophic high deductible plans. It pays only part of the deductible because nearly 15 years ago, when I had an HSA, my deductible reached $10,500. Crazy huh? And get this, you could only deduct around $5,000 or so on your taxes, nothing over, prompting a wave of medical bankruptcies.

And that's all before your insurers pays one cent.

But the media wants to blame the Affordable Care Act, instead of giving the ACA credit for finally exposing the horrors of the U.S. health care system to the public. Yea, it's bad,  real bad. 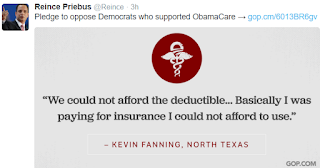 So the following analysis isn't anything new:


The median rate increase for the lowest priced, highly popular “Silver” plan will rise by 11% – compared to just a 7% increase in 2015 … increases that in many cases will neutralize the benefits of their health care plans or discourage some from purchasing coverage. “That these deductibles are so high is clearly one of the reasons people aren’t buying a plan—they simply don’t see themselves getting anything for the money,” - Health Policy & Strategy Associates. Health care policy experts say insurers designed their plans with substantial rising deductibles and other cost-sharing measures as a way to encourage low and moderate income Americans who qualify for federal subsidies to try to hold down their medical costs. 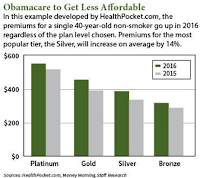 Nothing new. That's why so many people don't have health insurance, they're not "getting anything for their money." And besides the individual market, those who don't get employer provided insurance, employers are shifting more of the costs to workers:


The average annual out-of-pocket costs per worker increased nearly 230 percent between 2006 and 2015 - Kaiser Family Foundation. An eye-opening report by The New York Times found that many of the newly insured are “feeling nearly as vulnerable as they were before they had coverage.”

The ACA is an online marketplace of private insurers, that's all. Blaming government instead of insurance company greed is still something I can't wrap my head around.

A survey by the Commonwealth Fund published last November found that three in five low-income adults and about 50 percent of adults with moderate incomes believe that deductibles are “difficult or impossible to afford.”

And that's the way insurance companies want it; easy money from people that can afford it.
Posted by John Peterson, Democurmudgeon at 11/17/2015 01:30:00 PM