Hate America Crowd of GOP candidates say it’s “beaten,” in “economic downturn,” “entrepreneurship is crushed,” “nothing that we do now to win,” “wages are too high.”

Republicans have always accused liberals of not liking America; whining about it and always trying to change it. But as you can see by the title, it's really a bad case of Republican projection.

Voxdotcom compared the GOP presidential candidates view of America with reality, and it’s not even close:

Anyone watching the fourth Republican debate we would be excused for thinking America is mired in a deep recession — that the economy is shrinking, foreign competitors are outpacing us, more Americans are uninsured, and innovators can't bring their ideas to market.


"We are a country that is being beaten on every front economically, militarily," sighed Donald Trump. "There is nothing that we do now to win." Ted Cruz said. "How do we bring back economic growth?" "We have to take our government back," said Carly Fiorina, "because innovation and entrepreneurship is crushed by the crushing load of a 73,000 page tax code" and "Obamacare isn’t helping anyone." "What we are going through in this country is not simply an economic downturn," said Marco Rubio. "We are living through a massive economic transformation." Ben Carson said, "Only 19.8 percent of black teenagers have a job who are looking for one," he said, "and that’s because of those high wages."

They would be surprised to find that unemployment is at 5 percent, America's recovery from the financial crisis has outpaced that of other developed nations, the percentage of uninsured Americans has been plummeting even as Obamacare has cost less than expected, and there's so much money flowing into new ideas and firms in the tech industry that observers are worried about a second tech bubble.

Republicans still can’t offer a definitive plan that would make the numbers work. If anything (see the graph) they're promising to make things a whole lot worse. But that's probably just another way to justify even bigger cuts:


Republicans are increasingly focused on economic problems they don't really know how to solve, and don't have much credibility to say they will solve.

Republicans have entered into a disastrous arms race of ever more expensive tax plans that they have no way to pay for. The Committee for a Responsible Federal Budget released this graphic, which is based on the often optimistic estimates of the conservative Tax Foundation but still gives you a sense of how much these plans might cost: 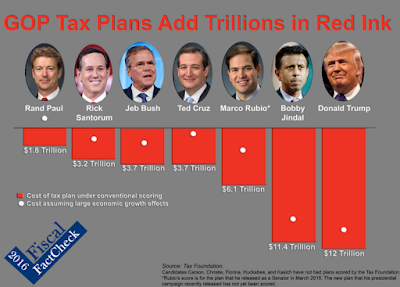