Quick to Kill the GAB, Republicans wait till next June to roll out new elections agency.

After Republicans hastily completed their extraordinary session with rapid fire destruction of election oversight and campaign finance laws, they've oddly decided to roll out the new elections agency at the latest possible date; June 2016, 5 months before the election.

The board of former judges losing their jobs at the GAB asked Scott Walker to fire them early, so the new setup had some time to get the process right: 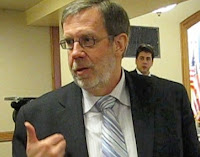 Tasking a new agency with elections oversight months before the 2016 election could lead to headaches for voters, according to the director of the state's elections and ethics agency -- on track to be dismantled by a bill lawmakers passed this week.

In a newly released memo to Walker, the GAB’s Kevin Kennedy urged Walker to veto the measure. One of the reasons Kennedy gives is that, under the bill, the new elections commission would take effect June 30. The upcoming general election is Nov. 8. It is a presidential election year -- those elections typically attract the most turnout -- and likely to be the first in which the state's voter ID requirement is enforced on a mass scale.

Kennedy writes that the timing "will create significant administrative problems for the conduct of elections in the upcoming presidential election year. The effective date of this bill – roughly five months prior to a major federal/state election – is irresponsible, if not reckless, and could have major impacts on voters across the State of Wisconsin," Kennedy tells Walker in the memo.

Reminds me of the Democratic warnings about WEDC, and we know what happened there. Oh, I forgot, they were just being partisan.

And since “irresponsible” is their middle name, and Republicans have set the bar so low, their voters won’t find the following comment remotely shocking:

"I think it's a good time to do it," the bill's Assembly sponsor, Rep. Dean Knudson, said last month.

Of course he does.