The GOP opened their debate in Milwaukee with the most revealing and truthful answers yet about their disdain for the middle class and the value they put on labor.

The Nation's John Nichols laid it out clearly today. Here's the video:


Moderator Neil Cavuto: "As we gather tonight—just outside, and across the country—picketers are gathering as well. They’re demanding an immediate hike in the minimum wage to $15 an hour. As the leading presidential candidate on this stage and one whose tax plan exempts couples making up to $50,000 a year from paying any federal income taxes at all, are you sympathetic to the protesters’ cause, since a $15 wage works out to about $31,000 a year?”

Trump responded: “I can’t be, Neil. [Taxes] too high, wages too high, we’re not going to be able to compete against the world. I hate to say it, but we have to leave [the $7.25-an-hour minimum wage] the way it is."

Carson also made up another mind bending theory:


"It's particularly a problem in the black community. Only 19.8 percent of black teenagers have a job, or are looking for one. You know that's because of those high wages. If you lower those wages that comes down."

So if we just had low wage jobs in the inner city, black teenagers would have jobs? Better paying jobs will only make things worse?

The Ugly Truth Is Out: Wow, wages are too high in the U.S. for this country to compete globally. This could be a news flash for tea party voters...or they just didn't notice. I think the latter.

Dr. Ben Carson trotted out the favorite fantasy that raising wages leads to unemployment. “Every time we raise the minimum wage, the number of jobless people increases,” Carson claimed.


“That isn’t true,” responded Politico’s fact-check site. “Multiple studies have observed instances in which the minimum wage rose and unemployment did not rise.”

Welders...again? Marco Rubio sang the same sweet Scott Walker song about the dream job of welding. Supposedly the nations turning out too many philosophers, more than corporate American needs right now. It's welding, welding, welding!!! Rubio and Walker's preoccupation with welders got the Yglesias treatment: 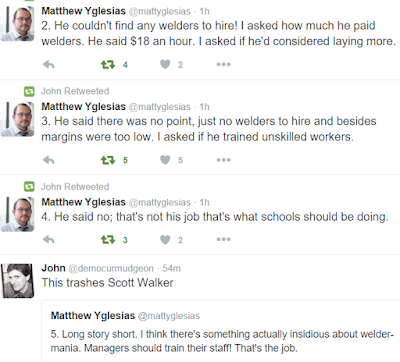 Interesting note about a welders income and that of a philosophers, from WaPo:


PayScale, a firm that analyzes compensation, put the median mid-career income for philosophy majors at $81,200 in 2008, with welders making $26,002 to $63,698. And Georgetown University's Center on Education and the Workforce said in a 2014 analysis that median incomes were $68,000 for people with an advanced degree in philosophy or religious studies

Minimum Wages are a Disaster in the 21st Century? Yes, that's what Marco Rubio said when he was asked:


Rubio: “If I thought that raising the minimum wage was the best way to help people increase their pay, I would be all for it, but it isn’t. In the 21st century, it’s a disaster. If you raise the minimum wage, you’re going to make people more expensive than a machine. That means all the automation that is replacing jobs and people right now will be accelerated.”

Did he just object to people having more value than a machine? Folks, we have reached that turning point. Can “Terminator: Revenge of Rubio” be next?

Perhaps the Republicans need to brush up on their party's origins:


In a forum that Lincoln would not have recognized as a debate, they rejected the mantle of the radical founders of a party formed to fight the reactionaries who Lincoln warned would “place capital on an equal footing with, if not above, labor, in the structure of government.”

“Labor is prior to, and independent of, capital,” Abraham Lincoln told the Congress in 1861. “Capital is only the fruit of labor, and could never have existed if labor had not first existed. Labor is the superior of capital, and deserves much the higher consideration.”