Let's admit one thing; it’s going to be impossible for Scott Walker and Republican legislators to make the argument that cleaner energy will make the cost of heating and cooling go through the roof, since that's exactly what's happening anyway using fossil fuels.


Wisconsin Public Service (WPS) wants to raise its customer charge again — this time to $25 a month — after just doubling it from $9 to $18 earlier this year!

Hostile to Alternative Energy: As one of the few states that increased the base price utility companies can charge customers to penalize the solar movement, making consumer investments worthless, it’s mind boggling to think those rates will probably be going up again. Scott Walker's crony filled Public Service Commission will make sure of that. WPR: 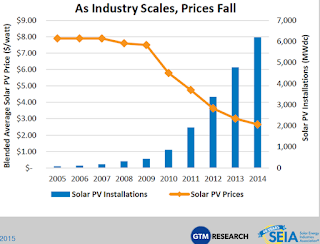 The Wisconsin Public Service Corp., a northeastern Wisconsin utility, wants to again increase its fixed monthly rate charge after having already implemented a hike earlier this year.WPS's fixed monthly fee nearly doubled to about $19. Now, the utility is asking the PSC for permission to charge $25.

When asking for the previous increase, WPS argued the money was needed to maintain infrastructure. That argument didn't fly with those who spoke out — including Jim Soletski, a former Democratic lawmaker from Green Bay. "We tell people you can't get a minimum wage increase, but we're more than glad to raise your service charge," said Soletski.

Green Bay Gazette: "It means consumers will pay more before they even turn on their lights," said Patricia Finder-Stone of De Pere. The utility also wants to raise electric rates 9.4 percent. WPS spokesman Kerry Spees said earlier this summer that any increase to the fixed charges approved by the commission would be offset by a corresponding reduction in the charge per kilowatt hour.


Wisconsin: Xcel Energy is trying to increase its customer charge from $8 to $18 every month. In Minnesota, the company was ordered to keep the charge at $8 (instead of raising it to $12), thanks to the efforts of AARP. AARP will argue the arithmetic is no different in neighboring Wisconsin.

See the story about the expiring solar tax credit, that includes the graph above.
Posted by John Peterson, Democurmudgeon at 9/12/2015 05:28:00 PM