Let's face it, Scott Walker is really bad with numbers, starting with his promise to create 250,000 new jobs, which he always followed up with the contradiction, government doesn't create jobs. That was our first clue.

Another thing, I never understood how cuts to spending became a substitute for responsible budgeting. Spending increased out a need to solve a problem, not because it was fun. So cuts to spending just left the problem for someone else to eventually deal with.

As the Washington Post detailed, Walker was your typical big spending, run up the charge card Republican we saw during the Bush years:

In a little more than two months, his presidential bid had amassed a debt of roughly $700,000, campaign manager Rick Wiley told the governor in a call Sunday night.

Money has long been a problem for the Walker family: Unlike many candidates for president, Walker lacks personal wealth. As a young state lawmaker, he made less than $40,000 per year. When he became the Milwaukee County executive in 2002, he kept a campaign promise to return much of his salary, a total that he says reached $375,000 by 2010. As governor, Walker was paid nearly $148,000 per year, in addition to free housing in the governor's mansion, taxpayer-provided vehicles and other perks. He also received a $45,000 advance for the 2013 book he wrote about his fight with the unions. But financial disclosures revealed that Walker has tens of thousands of dollars in credit card debt, including a large balance on a card with an interest rate of more than 27 percent.

This part kills me, since Walker fought any attempt to rein in student loan debt:

His two sons have taken on at least $100,000 in student loan debt and have yet to graduate from college. It's clear that unlike some candidates in the race, Walker could not afford to absorb any potential debt of a presidential campaign. Several donors said Monday night that fear of debt was a driving factor in Walker's decision to so suddenly step out of the race.

And like the true carnival barker he'd become, showmanship was everything: 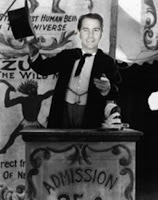 For an everyman candidate, his campaign events were often elaborately staged. In late July, Walker held a town hall at a family-style restaurant in Red Oak, a town with fewer than 6,000 residents in western Iowa. An advance team with a moving van of equipment arrived hours early to hang up flags, set up a sound system and arrange a stage with tiered seating to provide a backdrop of Iowans. Walker arrived with a large entourage: his security detail, campaign manager, personal aide, full-time campaign photographer, two Iowa-based staffers and a horde of low-level employees who handed out brochures. As he spoke for roughly an hour, one man on the stage had to shield his eyes from a bright spotlight. which worried some supporters, who considered the elaborate set-ups a waste of money so early in the campaign. These glitzy events seemed more suited to a candidate who had already locked down the nomination

Walker had the presidency in mind since day one of his career in politics, so what other reason did he have to give to voters?

It was unclear exactly why Walker wanted to be president. He seemed to write much of his domestic and foreign policy as he went along, rather than coming to the race with a clear vision of where he would take the country. For many voters who are often tired of uncompromising career politicians and gridlock in Washington, perhaps Walker's promise to fight Democrats just wasn't enough.

The idea that Obama needed a teleprompter was as ridiculous as it sounds, but that attack was a distraction from the scary habit of responding to questions with well rehearsed memorized comebacks, that often didn't have anything to with the question:


Walker knows how to stay on message — but seems lost when questions keep coming. Early in the campaign, Walker and his backers would brag about his ability to relentlessly stay on message: He again and again repeated the same campaign speech. He gave reporters the same answers to questions about issues of the day. He memorized his announcement speech and recited it. This often left him sounding robotic and not fully answering the questions he was asked.

But when reporters and cable news show hosts pushed for specifics, Walker would often slip up, making comments that didn't quite make sense or taking stances he didn't mean to take — but then hesitating to take a different position or admit that he had misspoken, perhaps for fear of cementing an image of being a flip-flopper. Instead, he appeared to lack clear stances

Which brings us to how much of a coward Scott Walker was, and the big lie that he was "unintimidated."

Walker seems uncomfortable with direct confrontation. Ahead of the first Republican debate, I watched hours of video footage from Walker's previous debates in Wisconsin. In a few of these, Walker had the opportunity to ask his opponent a question and passed. Instead, he stuck to his talking points and avoided confrontation.

This is a candidate who built his presidential campaign on the premise that he was a fighter — yet he seemed uncomfortable confronting people face to face, especially fellow Republicans. On the early campaign trail, Walker ignored protesters, maneuvered out of conversations that turned testy, rarely held town halls and avoided follow-up questions from reporters whenever possible.