Walker's inner sociopath rejects idea of helping Syrian Refugees as president: "Everybody wants to talk about hypothetical's, there is no such thing as a hypothetical.”

Scott Walker's sociopathic behavior has never gotten the kind of media attention it should have statewide or nationally. That I'm hoping will now change.

In one of the clearer examples of non-answer word salads, Walker's embarrassing and brutal disconnect concerning the plight of fleeing migrant families from Syria should scare the daylights out of every American voter. Imagine how he'll respond someday after a natural disaster, or when all our social safety nets have been repealed and the nation is faced with a dramatic increase in human suffering. Oh, sorry about that, hypothetical's don't exist, as Chris Hayes sarcastically laments following the clip below:


Reporter: “What would you do to address the migrants who are currently fleeing into Europe? Does (sic), should the U.S. accept some of those migrants into the country?”

Scott Walker: "Well, again the problem is we're ignoring the basis of the core of the problem. The problem is this president has had a weak stance in terms of taking on ISIS."

Reporter: “But to follow up, if you were president today, what would you do?”

Reporter: “Governor, the fact that these refugees need a place to go is not a hypothetical, and Pope Francis has even come in and said that countries need to help them. I mean, should the U.S. play an active role?”

Scott Walker:  "Again. I'm taking about what I'll do as president ... that will be a year and half from now."

New York Magazine wasn't about to let Walker's comments go unanswered, unlike the pass Wisconsin media would have given him: 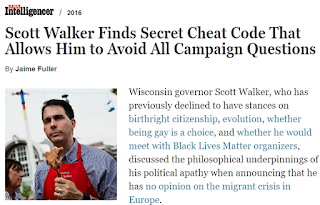 Walker has avoided answering questions with similar evasions before — although "I'm not president, so I can't answer that" is the closest he has come to finding the secret cheat code that will allow him to advance to the convention without having to provide much insight into how he might deal with the types of difficult decisions a president has to make.

When asked if he would have done the same thing as Obama during the auto crisis in May, he replied, “That’s a hypothetical question in the past. We’re going to talk about the future."

You really can't make this stuff up.