Republicans are to blame for losing 350 jobs in Waukesha, and probably more when you consider suppliers. This isn't on the Democrats. Thank Wisconsin GOP House members for sending 350 jobs to Canada, where economic policy is more predictable.  Here's what Paul Ryan said:


Ryan has said he opposes the bank in principle, calling it a "strange collusion of big business and big government."

Sounds like someone doesn't know what they're talking about, again. We always said this guy was no economic policy wonk...believe us now?


Blaming Congress for its failure to reauthorize the U.S. Export-Import Bank, an institution that finances sales of U.S. industrial equipment to overseas customers, General Electric Co. says it will stop manufacturing engines in Waukesha and move that work to Canada. About 350 jobs will be lost at the Waukesha plant.

Job creators? Think again. Opposition to the Export-Import Bank never did make any sense, and here's why: 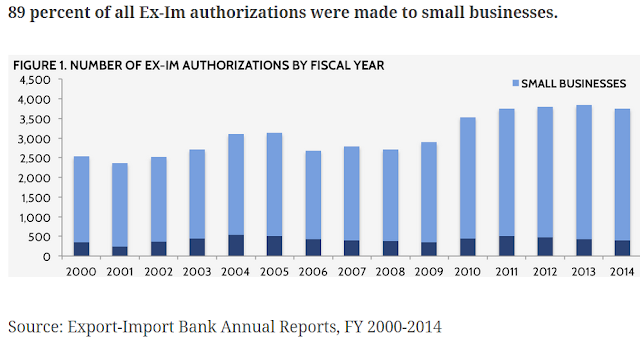 ...a limited but important role helping American companies, large and small, export their products in a global market distorted by the government credit activities of competitor nations. The bank’s overarching mission is to boost American-made exports and therein spur growth in jobs and income.

Republicans have been exposed as "job creating" frauds. jsonline:


Critics have contended that Ex-Im exemplifies crony capitalism ... the data do not support the notion that Ex-Im’s activity is more politically driven than market oriented. While opponents of reauthorization have emphasized that only 25 percent of Ex-Im authorizations are for small businesses, that amount reflects the actual makeup of U.S. trade. Furthermore, large companies that seek Ex-Im financing often produce high-value goods such as airplanes or mining equipment, the export of which often benefits numerous small business suppliers involved in production and export.


Republican members of the House blocked a reauthorization vote.

GE says the Waukesha plant has more than 400 U.S. suppliers and, in Wisconsin alone, suppliers receive millions of dollars in revenue from the plant. "We believe in American manufacturing, but our customers in many cases require Export Credit Agencies financing for us to bid on projects. Without it, we cannot compete, and our customers may be forced to select other providers," GE Vice Chairman John Rice said in a statement.

And because conservative voters instinctively hate unions, the real impact on the community described below will be ignored:


International Association of Machinists union. spokesman Frank Larkin (said) "The Ex-Im Bank was one of those rare government programs that worked as intended: It protected American jobs and returned a profit to the U.S. Treasury. Killing the bank means thousands of U.S. jobs will be needlessly sacrificed for an extreme political agenda."


"The failure of the House to act is now costing Wisconsin jobs. When American businesses have a level playing field, they can compete against anyone. The Export-Import Bank is an important tool that helps us create that level playing field…”

One GOP Ex-Im Bank supporter, Rep. Reid Ribble not only echoed Baldwin, but accidentally told the truth about his party:


“It would be a withdrawal simply for ideological reasons. Conservatives have this ideology that government should leave it to the private sector, but there are types of exports where the private sector won't pick up the financing of that business," Ribble said. "Companies will be forced to leave the country and take jobs to countries where there is export-import bank financing if we don't offer it."

But Dumb Ron Johnson wants to use these continued job losses (disaster capitalism) to make his point about higher corporate taxes:


"...it is a wake-up call concerning our nation's increasingly uncompetitive tax and regulatory systems."

The LA Times wrote this today:

The decisions by GE, its second this month, and other large and small companies are paving a way to conduct business in a world without the Export-Import Bank — a world in which U.S. jobs are permanently lost. Barely two weeks ago, GE said it was shifting 500 jobs from four U.S. states to Europe and China to make the production of turbines and generators eligible for export aid from those countries.

Last month, Boeing Co., said it could lay off several hundred employees at its Southern California satellite division because a customer that needed Export-Import Bank financing canceled an order.

ProGauge Technologies Inc., a small Bakersfield manufacturer of oil industry equipment, is awaiting word on a bid for a multiyear project in the Middle East worth as much as $40 million. Chief Executive Don Nelson said that if the company wins, he will do most of the work in the unnamed nation because it would be too expensive to obtain the required delivery guarantee without the help of the Export-Import Bank.

Excuses Excuses: But conservative think tanks and ideologues are now saying businesses are always leaving the country for something, so what the heck if we lose more jobs:

Companies move jobs out of the U.S. for many reasons, including lower taxes, said Dan Holler, a spokesman for Heritage Action for America, a conservative group that has helped lead the opposition to the bank. GE, for instance, already has 7,000 employees in Canada, a country with a much lower corporate tax rate than the U.S. has, he said.

But why listen to me, Democrats or even a few Republicans:


Milwaukee businessman Bill Maxon has no question where he stands on the issue. Maxon runs a small company that makes machines used in mixing and placing concrete. Exports account for a large percentage of his business, and he says the bank has played a part in making that happen. Maxon said he's at risk of losing a deal in Argentina because he can't get U.S. Export-Import Bank financing for the customer.

"Unfortunately our Chinese competitor is probably going to get the deal, and it's specifically related to the availability of financing," Maxon said.