Vox: She made everyone else on the stage — especially Trump — look unprepared. But she did it in part by playing fast and loose with the facts. Her barrage of specifics often obscured a curious detachment from reality.

In just scratching the surface, here are just a few easy fact checks that cut through the Fiorina fiction: 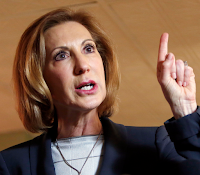 Fact checkers will have a field day with Fiorina: Her answer on Russia, for instance, was bizarre.


Fiorina: “What I would do, immediately, is begin rebuilding the Sixth Fleet, I would begin rebuilding the missile defense program in Poland, I would conduct regular, aggressive military exercises in the Baltic states. I'd probably send a few thousand more troops into Germany. Vladimir Putin would get the message.”

The Sixth Fleet is already huge, and it's hard to say why adding to its capabilities would intimidate Putin — after all, America has enough nuclear weapons pointed at Russia to level the country thousands of times over. Her proposal for more military exercises in the Baltics seemed odd in light of the fact that President Obama is already conducting military exercises in the Baltics. And the US already has around 40,000 troops stationed in Germany, so it's hard to say what good "a few thousand" more would do. And pushing on a missile defense system in Poland is a very long-term solution to a very current problem. In total, Fiorina's laundry list of proposals sure sounded like a plan, but on inspection, it's hard to see why any of them would convince Putin to change course.

Here's another favorite fabricated GOP narrative about Obama doing nothing about immigration:


Her immigration answer was also odd to anyone who knew the issue's recent history. It's true Obama didn't immediately push immigration reform when he took office, but it was his top priority after reelection, and he spent a solid year trying to make the Senate's comprehensive immigration-reform bill — the one crafted, in part, by Sen. Marco Rubio — into law. That legislation was stopped by Republicans in the House of Representatives, not by the Democrat in the White House. "Send me a comprehensive immigration reform bill in the next few months," Obama begged in 2013, "and I will sign it right away."

Check out this bonus Fiorina fiction that will bend your brain:

Or take her biggest applause line of the night: a riff on the Planned Parenthood tapes that set conservative Twitter afire. "I dare Hillary Clinton, Barack Obama to watch these tapes. Watch a fully formed fetus on the table, it's heart beating, it's legs kicking while someone says we have to keep it alive to harvest its brain."

And who can forget the approved Fiorina campaign ad with demonic sheep?