Perhaps it was the national media who exposed the real Scott Walker to Wisconsinites. Maybe voters found out how irresponsible news outlets statewide were for giving Walker a pass on almost every important misstep.

Or maybe voters were stunned by the yard sale of publically supported investments Walker needed to unload to pander to conservative voters in Iowa. jsonline:

Gov. Scott Walker's job approval rating dropped to 37%, even after he left the presidential race, according to the Marquette University Law School Poll. Walker's disapproval rating was 59%. The overwhelming majority of those polled — 62% — would not support a 3rd Walker term, while 35% would support the move.

Among Democrats, Hillary Clinton leads with 44%. Between Republican Sen. Ron Johnson and Democrat Russ Feingold … Feingold is leading Johnson 50% to 36%. The phone poll was conducted Sept. 24 to 28 with 803 registered voters. 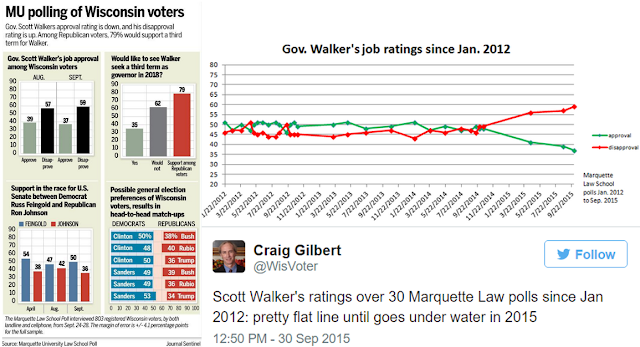