Orwellian politics is here at last, thanks to Scott Walker and his one party pirates!

Now that we're an angry and divided state, Republicans can now spend their time to try to redefine the ugly sounding word “partisan,” you know, make it into something honorable.

The Government Accountability Board, our elections watchdog, was already in trouble for having the word "accountability" in their name. But add a few investigations into Scott Walker's campaign fund raising and illegal router? That was all the Republicans could bear, especially Rep. Joe Sanfelippo: 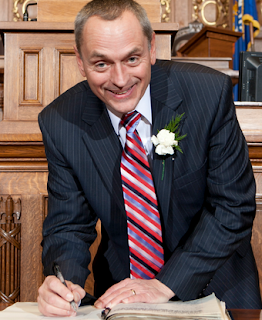 We have to put forward a reform bill that ensures the rogue GAB can no longer operate with a hidden political bias. The GAB is statutorily required to be nonpartisan, but we have learned otherwise with the agency’s involvement in the controversial John Doe probe.

Here's where Sanfelippo starts hallucinating on the GOP Kool-aid. Demonstrating just how bad power corrupts, Sanfelippo contorts and reshapes the negative influence of partisan politics into something wonderful:

The reality is partisanship exists whether a person is elected to government, employed by government or volunteers for government. But being partisan in and of itself is not necessarily a bad thing.


It could be argued the nonpartisan title actually promotes covert partisanship by providing cover for those who intentionally abuse their power to advance their own political ideologies.

According to Joe Sanfelippo, we've got to stop kidding ourselves. This too will blow your mind:


That’s why we need to stop kidding ourselves and finally accept that it’s impossible for the GAB to be entirely nonpartisan in its current form and make the agency completely partisan. Because four votes would be needed to take any official action, it would be extremely difficult for one side to have a distinct advantage.

Sanfelippo could have made it a 7 member board instead of 6, with one vote as the tie breaker, but that's not the point, is it? The real question is; why make the GAB partisan when it's already partisan?
Posted by John Peterson, Democurmudgeon at 9/12/2015 05:02:00 PM