Republicans nationwide saw Scott Walker's Wisconsin as small potatoes and not a trickle down experiment they could brag about. It's also possible I'm giving too much credit to a party hypnotized by the showbiz bloviating of agenda free Donald Trump. The one thing Walker's fall does prove is how completely out of touch conservative talk radio is in the state. Believe it or not, he's nothing like they said he was: 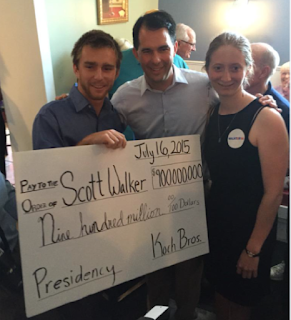 Huffington Post: Since money is (often) the name of the game in politics, the above graph is another important snapshot of Walker's campaign. Although the Badger State Republican raised more than $20 million, it was all tied up in his super PAC.

Super PACs can collect unlimited sums of money, but are restricted on how much contact and coordination they can have with the candidate they back. Walker's super PAC could spend money on ads supporting its candidate, for example, but couldn't cut checks to his campaign staff or pay for his travel. Walker's official campaign committee hasn't yet released fundraising totals (those numbers are due to the Federal Election Commission Oct. 15), but news outlets reported he wasn't bringing in any cash.

As Politico noted, Walker's exit may point to the limitations of super PACs' true power over the nomination process.