Let's be honest, when you look at Scott Walker now, isn't it a lot harder to understand how anyone could trust this guy?

Let's take a look at his recent word salad claim that he's a "public servant," not a career politician that Wisegeekdotcom defines this way: 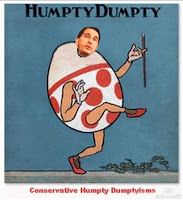 "political figures who have no significant professional experience outside of the political arena … who has worked in politics for a period significantly greater than that spent working in an outside field."

In John Harwood's interview, Scott Walker spewed another Humpty Dumptyism when he said:

"A career politician, in my mind, is somebody who's been in Congress for 25 years."

"In my mind?" Outrageous yes, but it might be the only honest thing he's said recently.

The idea that Walker "serves" anyone is laughable, especially after hearing him go on and on about being a big bold leader. In reality, he would be getting things done for a mere 25% of Americans (even a smaller percentage if you just count conservative voters). He's gotten things done because he has a compliant right wing one party system in Wisconsin. If you're not a Republican, then you don't count in Walker's new world order.

Walker isn't shy about his "divide and conquer" platform either, which again, never throws up a few red flags for the news media:


Harwood: "When you talk about fighting and winning, sometimes when I hear that, it sounds to me like the emphasis is on the fighting, almost like you're running to be the hockey team enforcer."

Walker: "Well I think right now people do want to fight in America."

And yet Walker been in office since 1992, amounting to 23 years on the pubic dole. And after all this time, working across party lines is not Walker's style:


Walker: "I think people want a fighter who can win, get the results. I fought, I won, I got results, and I did it without violating my conservative principles."

In the video clip, Walker also claims to be just "a normal guy. I'm a guy from...you know...that's got a wife and two kids..!" That sound pretty much like "normal guy" President Obama, who Republicans never considered "normal guy" enough to hold office. Guess he should have gotten a Harley like Scottie. Due to copyright issues over the video content, I've put together this slide show:
Posted by John Peterson, Democurmudgeon at 9/04/2015 10:23:00 AM