One Day!!!! Walker in Wisconsin just one day in July on official business.

Talk about putting all his eggs in one basket, Scott Walker really did abandon Wisconsin to run for president, especially in July. One-Day-Walker.

It's so pathetic to hear pundits and GOP leaders nonchalantly admit, like it's no big deal, that Walker needs to "reacquaint himself with Wisconsinites?" Oh, that's all. 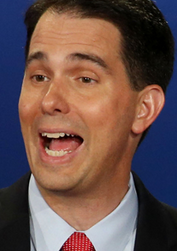 WPR: Walker's official calendar for July, released to The Associated Press under the state's open records law, shows Walker spent one day in July in Wisconsin on official business after launching his presidential run July 13. The visit was to attend a Wisconsin Economic Development Corp. board meeting and to sign a bill banning abortions after 20 weeks of pregnancy.

Walker canceled campaign events to spend another day in Wisconsin to visit with the family of Carson Holmquist, a Marine killed at a Navy-Marine reserve center in Tennessee.