A Kentucky county clerk has decided, like so many "Constitutional conservatives" have, to reject a law she doesn't believe in, like granting same sex marriage licenses. Don't you just love these cafeteria constitutionalists?

This amazing video has gone viral since the "U.S. Supreme Court Monday declined to intervene in the case, leaving Davis no legal grounds to refuse to grant the licenses."

A county clerk in Kentucky has again refused to issue marriage licenses to gay couples, invoking her religious beliefs and "God's authority" … Rowan County Clerk Kim Davis supporters said: "Praise the Lord! ... Stand your ground." Davis has said her deeply held Christian beliefs don't let her endorse gay marriages. Other activists shouted that Davis is a bigot and told her: "Do your job."

Of course clerk Davis can't imagine the chaos her idea might bring to the nation if everybody thought this way. There's no concept beyond me, me, me. 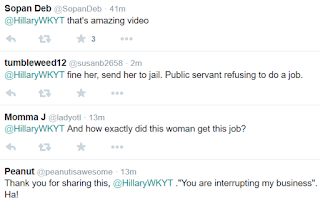 As I've mentioned before, Republicans like Paul Ryan have been pushing the idea that God's word, and bestowed rights, takes precedent over the U.S. Constitution. I never understood why the press didn't question this dangerous conservative viewpoint, and where it could lead, but it's like it's too late now:


Randy Smith, leading the group supporting Davis, said he knows following their instruction to "stand firm" might mean Davis goes to jail. "But at the end of the day, we have to stand before God, which has higher authority than the Supreme Court," he said.

Imagine if story clerks refuse to sell guns to customers because they believed it violated one of the Ten Commandments; "Thou shalt not kill."

Judi submitted this comment about our bible thumping cafeteria Christian and public servant, that bears repeating:


13 Let everyone be subject to the governing authorities, for there is no authority except that which God has established. The authorities that exist have been established by God. 2 Consequently, whoever rebels against the authority is rebelling against what God has instituted, and those who do so will bring judgment on themselves. 3 For rulers hold no terror for those who do right, but for those who do wrong. Do you want to be free from fear of the one in authority? Then do what is right and you will be commended. 4 For the one in authority is God’s servant for your good. But if you do wrong, be afraid, for rulers do not bear the sword for no reason. They are God’s servants, agents of wrath to bring punishment on the wrongdoer. 5 Therefore, it is necessary to submit to the authorities, not only because of possible punishment but also as a matter of conscience. 6 This is also why you pay taxes, for the authorities are God’s servants, who give their full time to governing. 7 Give to everyone what you owe them: If you owe taxes, pay taxes; if revenue, then revenue; if respect, then respect; if honor, then honor.

Conservative crazy guy Steven Crowder found an AP story that claimed she ran as a Democrat for a nonpartisan position as county clerk. Huh? Sure, never mind out poor picked on bigot is getting a little help:


Davis is being represented by the Liberty Counsel, a far-right fringe group that specializes in anti-gay litigation. When a federal judge ordered Davis to issue licenses or be held in contempt of court, the Liberty Counsel advised her to disobey the ruling.

And yet Crowder did more to support my point here, by posting this typically conservative "I'm a victim" rant:


Get it America? THIS is the real war. This is not about cakes, photos, or the issuing of a marriage license in Rowan County, Kentucky. This is about taking down Christianity, which believes in moral right and wrongs, natural laws, and heaven and hell. Remember, the left doesn’t bat an eyelash if a Muslim bakery denies gay couples a cake. This is not about taking down religion, but Christians. With those pesky Christians out of the way, the left will be free to do what they want. If there is no God, there are no unalienable rights (as given to us by God). Clever leftists.

Folks, the real war against the left, Democrats, progressives and liberals. Conservatives won't be happy until they punish, vilify and destroy us. So why aren't Democrats fighting back?