Rep. Sanfelippo: Voters not qualified to elect best choice for the Dept. of Public Instruction...leave it up to the governor and legislature.

Republicans haven't quite crushed every remnant from previous Democratic administrations, including constitutionally protected elected offices, but they're feverishly working on it. Their favorite ploy; defunding their targets, like the State Superintendent of Public Instruction.

Republican voters should consider a few important things the next time they cast their vote; are they willing to politicize education by dumping the nonpartisan state superintendent; do they want to centralize even more power in the governors office; should they let legislators to make big statewide changes that would just produce chaos into district planning? jsonline:

Rep. Joe Sanfelippo (R-New Berlin) for a constitutional amendment that would shift the authority to select the superintendent of Public Instruction from the voters to the governor.

No matter what ridiculous reason is given, don't believe it. Not surprisingly, the state's only two liberal voting areas, Madison and Milwaukee, are seen as the source of all our problems. They must be changed. Should Superintendent Tony Evers, who oversees K-12 education statewide, answer to the whims of anti-public education lawmakers who have discounted the influence of poverty:


Rep. Joe Sanfelippo countered with a statement Thursday saying Evers' address glossed over the state's educational deficiencies, particularly in the Milwaukee and Madison school districts. He vowed to introduce a series of bills this fall that would decentralize power by shrinking the size of DPI and giving that money directly to local schools through per pupil aid.

"Imagine how much better off our students — our future workforce — would be if we eliminated the excessive overhead at DPI and put that funding directly into the classrooms," Sanfelippo said.

Yes, think of all the wasted dollars used to employ hard working professionals who are specialist in child education. What do they know about what our kids end up with in the classroom. I want to follow the increasing chaotic changes offered up by big government Republicans in Madison. 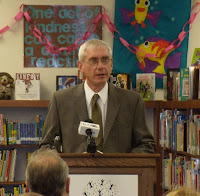 "The impact the ongoing assault on public education happening in this state and across the nation may make for great political theater, but it's making it more and more difficult for our teachers to stay the course. I support the right of the Legislature to enact laws as they see fit. The people who have elected them have given them that authority. However, when policy conflicts with the needs of our kids, it eventually floods into the classroom ... a sad attack at the heart of our democracy and our state's history. The need and opportunity for real school finance reform has never been more evident. We are becoming a state of haves and have-nots. I want my grandkids to attend a 'have' school."

Remember, our genius Representative said this...


"Special interest groups can get someone without the proper qualifications to win a popularity contest every four years."

Either he doesn't know or is just flat out lying, but...


Evers received his bachelors (1974), masters (1978), and doctorate degrees (1986) from the University of Wisconsin–Madison. Evers began his professional career as a teacher and media coordinator in the Tomah school district. In 1979 to 1980 he was principal of the Tomah elementary school, and from 1980 to 1984 he was principal at the high school. From 1984-1988 he was superintendent of the Oakfield school district, and from 1988-1992 he was superintendent of the Verona school district. From 1992 to 2001 he was administrator of Cooperative Education Service Agency in Oshkosh.

Attacking Evers and not dealing with real reform is the name of the game for work averse freeloading Republicans.

In fact, they're now getting help from the conservative lawsuit mill Wisconsin Institute for Law & Liberty:


A 2011 law that would have given the governor the ability to block administrative rules by state schools Superintendent Tony Evers (lost in court). A unanimous state appeals court found a portion of the law unconstitutional in February. Former Assembly speaker Scott Jensen said in a statement issued by the conservative Wisconsin Institute for Law & Liberty that "the Court of Appeals decision undermines the constitutional authority of the Legislature to craft educational policy."

As usual, the reader comments section had the best responses:


-How about we do what the state constitution says. It has worked well since 1848, no matter what ALEC and the college drop-outs say. Do the people really want these big government special interest tools to have unchecked power in every area of our lives?

-Does anyone know how much one needs to contribute to Walker to be appointed Superintendent?

- This isn't about saving money or efficiency, it's about political vendetta. Why is Evers demonized while Sanfelippo is a hero to some? Bottom line is, this is one more instance of taking power from the voters and placing it in Walker's hands. His claims of local control are false.

- "...Sanfelippo fired back, vowing to gut the Department of Public Instruction's $137 million operating budget and send some of those funds to school districts around the state..."

-But, but, Joe, a number of your Republican colleagues keep telling us, more money is not the answer. You just want a superintendent that leans right, then it wouldn't matter if he/she was elected or not.

- Win an election, have some winger bozo say your position should be appointed.

- It is always better when you remove the voice of voters. Wait. What???

- This is a sad situation, a widely admired education leader pleading for understanding from ideological bullies, America's modern day barbarians. How low can we go?

- stinkypinky: I like this Sanfelippo guy! Evers is a Democrat hack and a longtime union stooge. Cut his budget to nothing, give the money to the schools, and award him an office in the basement right next to Lonely LaFollette.

-Wilber:@stinkypinky, If Evers was appointed by Walker, whose "hack and stooge" would he be then? By all means, let Walker appoint the superintendent. He has such a great track record appointing and hiring people. Russell, Cavanaugh, Wink, Rindfleisch...