Walker promises national roll-out of Wisconsin's phony energy plan "All of the Above."

Scott Walker took office at just the wrong time when it came to business and job creation centered on alternative energy.

Bad timing too, because coal mines are shutting down due to lack of demand, while state's around the country are focusing in on natural gas, solar and wind energy. The writings on the wall...but not if Scott Walker becomes president.

Walker's "All of the Above" spin is anything but, and the charts below prove that spectacularly: 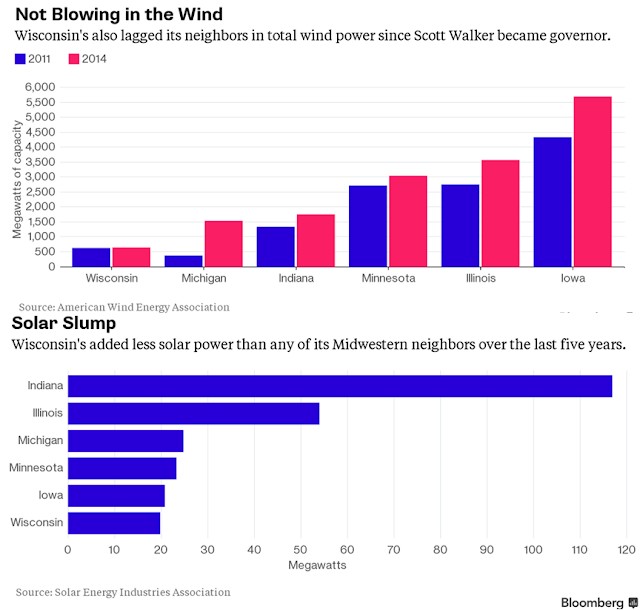 According to Bloomberg News, Walker's the worst:

As far as wind and solar developers are concerned, the Wisconsin governor may be the worst man for the job.

Five years after Walker took office, renewable energy in Wisconsin is lagging the boom in the rest of the country and industry blames the two-term governor for the shortfall. Walker and his appointees have pushed new restrictions on windmills, cut tax incentives and research funding and last year imposed the nation’s highest fees on rooftop solar owners.

“Renewable energy isn't only confined to wind and solar,” Laurel Patrick, a spokeswoman, said in a statement. “Governor Walker wants residents and businesses to have as many options as possible when it comes to energy resources.” an “all of the above” energy policy that didn’t favor any particular source.

Walker said the country needs as many different “energy options as possible out there and if I was in a position as president I’d advocate for that.”

The state hasn’t added any new wind capacity since 2011, according to the Washington-based American Wind Energy Association. And no Midwestern state has added fewer megawatts of solar in that time, says the Solar Energy Industries Association, another Washington group.

The state has made life harder in other ways, industry says. Wisconsin officials have refused to clarify rules on whether solar companies can lease their panels to homeowners, keeping out national players. Gary Radloff, a policy analyst at the Wisconsin Energy Institute, which conducts research with private sector energy companies, said Wisconsin’s become “an island of renewable-energy stagnation amid a sea of growth.”