With his poll numbers dropping off the chart, Scott Walker's going back to what made him a household name among low information tea party voters: bashing teachers.

Clueless and uninformed, Walker's latest dig at teachers is coming across like a detached disciplinary 50's father, who never had any curiosity in his son's schooling. If he did any research at all, he'd know what his sons needed most besides great teachers in school, was a decent recess.

Time for students to let loose has declined over the decades. Many educators feel the loss of recess effected boys the most, resulting in bad grades and low test scores. That's especially true if you compare rural/affluent districts with inner city schools. Why am I not surprised there's a racial component: 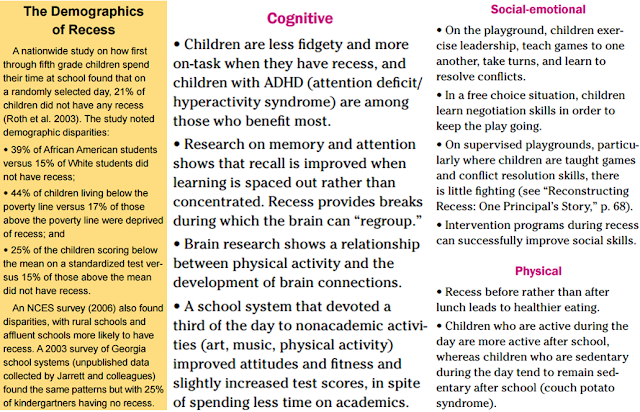 Proving he has no business shredding public education, Walker is now making fun of recess, blaming the teachers and their union for demanding more time in the school yard. Here's his bizarre tweet:

I went to Walker's link, where I came across his opinion piece on recess:

Besides asking for a cost of living increase after 6 years of nothing in the Seattle area, teachers want to help their students learn by increasing their recess time. Research backs up the policy as you can see by the charts above, but damn the brainy science behind education. We want politicians to make those decisions now.

Recess really? Talk about picking the wrong issue. Teachers are not walking around with their heads floating in some kind of union bubble, they're too busy feeling responsible to their students. I saw that last night when I met my sons 11th grade teachers. I was envious in fact. Times have changed. Teachers are nothing like the image Walker has created to advance his career.


Walker: "The union bosses are betting that if they can make parents and children suffer, they can get what they want."

Bizarre. Walker can’t get the idea of trashing teachers and squashing labor out of his heads for even a second.

He continues to brag about the great test scores coming out our public schools, as if his short time in office has inspired students to do well just for him, our charismatic unintimidated leader. Of course Walker won't credit 5 years of Common Core standards and the whole 12 years it takes to actually turn out great students. Sadly, all of that is about to change, slowly, unless something is done soon.

A quick Google by Walker's team might have changed their message, ya think?


Children today are likely to have 10 to 15 minutes of outdoor playtime during the school day, if they are lucky. No wonder there is an upswing in childhood obesity and an increase in childhood heart disease and type 2 diabetes. No wonder teachers are concerned about a generation of children who can’t entertain themselves, have social difficulties, and are fidgety and off task in class … there is considerable research to suggest that recess has many benefits for children in the cognitive, social-emotional, and physical domains.


In Minnesota, for example, lawmakers are considering a bill that would prohibit schools from withholding recess time as a form of punishment. At least 11 states have similar prohibitions, according to the Reston, Va.-based National Association for Sport and Physical Education. in 2012, when the American Academy of Pediatrics released a position paper saying recess "should not be withheld for punitive or academic reasons."

The Centers for Disease Control and Prevention recommends that all elementary school students get at least 20 minutes of recess time each day. The American Academy of Pediatrics position paper highlights research that shows young students have improved literacy scores and better cognitive functioning when they get breaks for physical activity.


And it was Republican George W. Bush who cut recess times while dramatically increasing the amount of testing. Want to complain about too much testing? Blame Bush's No Child Left Behind for starting all this.