Bad ideas don't die in the legislature, they live on and get passed in secret by arrogant majority Republicans who keep grabbing for more and more power.

Which immediately brings to mind Republican Assembly leader Robin Vos. Public opinion and the Fourth Estate be damned when it comes to being accountable to the voters. Republicans are redefining and expanding on the idea that power corrupts. 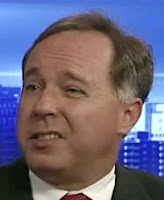 Just weeks after being forced to retreat from wholesale reductions to Wisconsin's open records law, Assembly Speaker Robin Vos put his aides back to work on elements of the same controversial proposal, new documents show.

The records released Tuesday by the liberal Center on Media and Democracy in Madison showed that an aide to Vos requested a new legislative draft on July 23, seeking a bill to give the Legislature a different status on open records from other government bodies in Wisconsin.

Give Vos credit for creativity coming up with an idea that boggles the mind: 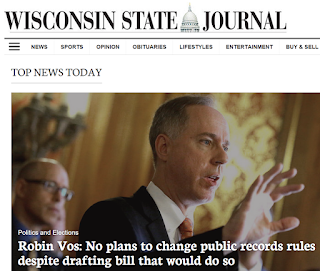 Under the proposal, lawmakers could change the open records rules applying to them with a public vote but without the necessity of a public hearing or approval of the governor. That's because going forward legislators would only have to change their own rules to change their open records requirements rather than change state law, which is currently the case.