While Scott Walker "talks" about higher wage jobs, the economy is now producing lower wage jobs thanks to the free markets Great Recession.

Scott Walker has promised to do nothing about low wages, but has promised to "talk about" creating high wage jobs. But talk doesn't put a whole lot of food on American tables, does it?

Walker: "The left claims that they're for American workers and they've just got really lame ideas — things like the minimum wage. Instead of focusing on that, we need to talk about how we get people the skills and the education and the qualifications that they need to take on the careers that pay far more than the minimum wage."

We all want that, along with unicorns and pots of gold at the end of every rainbow. 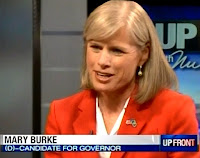 Burke: “I think it’s an approach that someone who’s been in politics their whole life takes.”

Or we can imagine low wage jobs are just entry level, and nothing more:

Fox 6: “…we look at the minimum wage not as a family-supporting wage, just as an entry-level wage for young people to get their foot in the door for a job in high school,” Rep. Mark Honadel said.

But in the new economy, brought on by Reaganomics and the free market induced Great Recession, we've seen the creation of low and lower wage jobs:

A report by NELP, the National Employment Law Project, underscores why so many Americans are still angry about the state of the economy and with what they see as the inability of Democratic and Republican leaders alike in Washington to do anything to improve living standards for many ordinary workers.

NELP’s analysis showed that once inflation was taken into account, median wages across all occupations fell by 4 percent between 2009 and 2014.

Wage declines in the lowest-paid occupations were much worse, dropping 8.9 percent for restaurant cooks and 6.2 percent for home health aides.

Along with stagnant or falling wages, one of the most persistent complaints about the current economic expansion is that many of the jobs created so far have been low-paying ones. That has changed recently, with more hiring in better-paying fields like business and professional services.


Blame Reagan: The interactive graph (I love it when I can post these) should tell you all you need to know about Reaganomics. Conservatives should think long and hard the next time they hear Scott Walker or any other candidate brag they want to continue Reagan's legacy. EPI:


One explanation may lie in the findings of another study released on Wednesday by the Economic Policy Institute. Its report showed that even as labor productivity has improved steadily since 2000, the benefits from improved efficiency have nearly all gone to companies, shareholders and top executives, rather than rank-and-file employees.

Labor Department data indicated that productivity in the American economy in the second quarter rose at an annual rate of 3.3 percent