Walker's record on Slow Job Growth and our ever Increasing Debt.

Supply side Republican diehards have seen their economic dreams turn into one nightmare after another, culminating into what we now call The Great Recession.

The hard work it would take to readjust their ideological thinking is apparently not going to happen. Remember, this is a party of elected freeloaders who get their legislation from lobbyists, all the while despising every taxpayer supported second.

Fiscal Conservatism Fails Again: Scott Walker's economic report card is dismal, as we can all see by Wisconsin's poor showing nationally and in the Midwest. For Walker, slogans and spin can't alter the facts. 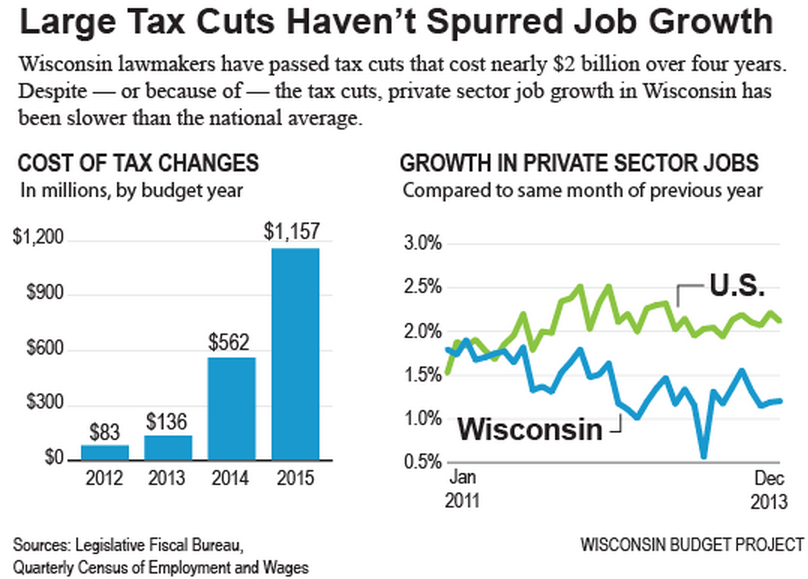 The number of private sector jobs in Wisconsin grew by 1.2% in 2013, compared to 2.1% nationally. State lawmakers have passed dozens of tax cuts since 2011, but that hasn’t spurred job growth. Despite nearly $2 billion in tax cuts over four years, job growth in Wisconsin continues to be slower than anyone would like, and our growth in gross domestic product is also well below the national average.

While CEO's praise their willing dupe Scott Walker for all the tax cuts, these "job creators" forgot to...create jobs. I'm still waiting for the day a business cut its own revenues because they think people should keep more of their hard earned money? That's what they keep telling government to do, and Republicans are dumb enough to take the bait.

That's not all: And the state’s debt under Walker continues to climb, with no apparent plan in place to solve that problem. According to the Legislative Fiscal Bureau's chart, Walker has increased our debt every year he's been governor, and then some: