Walker Trashes Successful Wisconsin Company to get Reelected. Not Open for just any Business it seems!

Our incidental governor seemed surprised his recent campaign ad was being criticized for attacking a successful Wisconsin company that employs over 1000 people. Scott Walker would never do that: 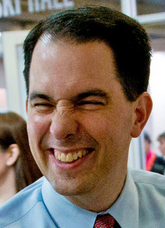 Gov. Scott Walker told reporters on Thursday that he's not using his campaign to attack the Trek Bicycle Corporation, even though it began airing a 30-second commercial this week that blasts Democrat Mary Burke and her family business for outsourcing jobs. “I'm not attacking anything,” he said … “…she's taking credit for building that company into what it is today.”

So this is how Scott Walker talks up successful companies in Wisconsin, from his campaign site (NOTE to Out-of-State Businesses, just stay on Walker’s good side, if you know what I mean):

1. Burke fails to mention they have 800 employees overseas.

2. Officials at Millionaire Mary Burke's family company say that more than 99% of their bicycles are manufactured in other countries.

3. In 1995, the Department of Commerce awarded $875,000 in taxpayer money to Trek Bicycle to construct a facility in Walworth County. In 2000, the State of Wisconsin forgave a portion of that money ($392,300), and subsequently, while Trek still owed taxpayer dollars, Trek filed a plant closing and mass layoff notice with the Wisconsin Department of Workforce Development.

4. The Trek CEO was well aware of low wages, dismal working conditions and poor environmental standards in China, yet the company shipped Wisconsin jobs there anyway, their concern being high taxes - not worker conditions.

This isn't the first time Walker trashed a company or industry not on his list of favorites. The irony of course is that everything they bash Trek for supposedly doing, are much touted major policy positions of the GOP. In fact they would love to loosen environmental standards, safety regulations and get rid of the minimum wage. Walker also chairs the Wisconsin Economic Development Corporation, that gave out taxpayer money to companies who've off shored jobs as well. But he forgot to mention that.

WPR: Mary Burke's brother John Burke, who is Trek's current CEO, blasted the Walker for making what he said were false statements about the Wisconsin company. John Burke shot back accusing Walker of making false claims “to try to harm the company” that his family had worked hard to build. “Mary Burke did not make any manufacturing decisions; I did,” said Burke. “If I had not made the decision to source product globally, including from the United States, Germany, Holland and China, there would be no Trek and no 1,000 Wisconsin Trek jobs today.”