The only time cronyism isn't really cronyism is when Republicans successfully rationalize away the guilt and shame of their behavior...that pretty much stinks to high heaven for everyone else. Our incidental Gov. Walker will be very surprised I'm sure.

Political silence and loyalty comes at a price: I wonder how the two qualified finalist feel right about now? 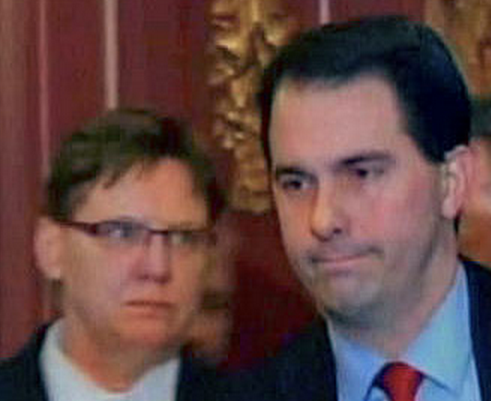 WSJ: The chairman of the state Public Defender Board on Thursday defended the hiring of a longtime aide to Gov. Scott Walker for the public defender office’s top IT position — even though she didn’t interview for the job and wasn’t a finalist.

“As I am sure the questions will fly as to who pressured us into putting her (Cynthia Archer) in this new position, I can assure you this was an internal agency decision and not a decision made for the agency by anyone else,” Danny Berkos, a Mauston defense attorney said.

The unemployed should be so lucky; don’t seek work = get called for job:


Archer was hired as chief information officer for the office at a salary 31 percent higher than her predecessor. Archer also received an 11.7 percent pay raise, to $113,459 annually. Archer was not one of seven candidates who interviewed for the job, nor one of two finalists ... department spokesman Randy Kraft said. The final decision recognized the importance of Cindy’s hands-on knowledge and experience with the agency’s aging technology.”

You think her "hands-on knowledge and experience with aging technology" had anything to do with that secret router?


Archer was among Walker’s campaign and county staff who used private emails and a secret Internet router to hide campaign-related communications from public disclosure. Archer and Walker were not charged with any wrongdoing.