It looks like Scott Walker set up Wisconsinites to lose Premium Subsidies on the Exchanges. Now that's moving forward.

It was a bizarre ruling today by a conservative activist court that called into question all the tax credits people on the ObamaCare government exchanges would be receiving.

While repeal crazy low information voters cheered the ruling, little do they realize that once the subsidies are gone, insurers will literally kill them with premium price increases and exclusions. But it's a victory for them none the less.

It now looks like Scott Walker's decision to abandon our nearly completed state exchanges for political reasons will jeopardize all 130,000 ObamaCare customers in the state. Add to that the 35,000 families once covered by BadgerCare (Medicaid), who no longer have anything. 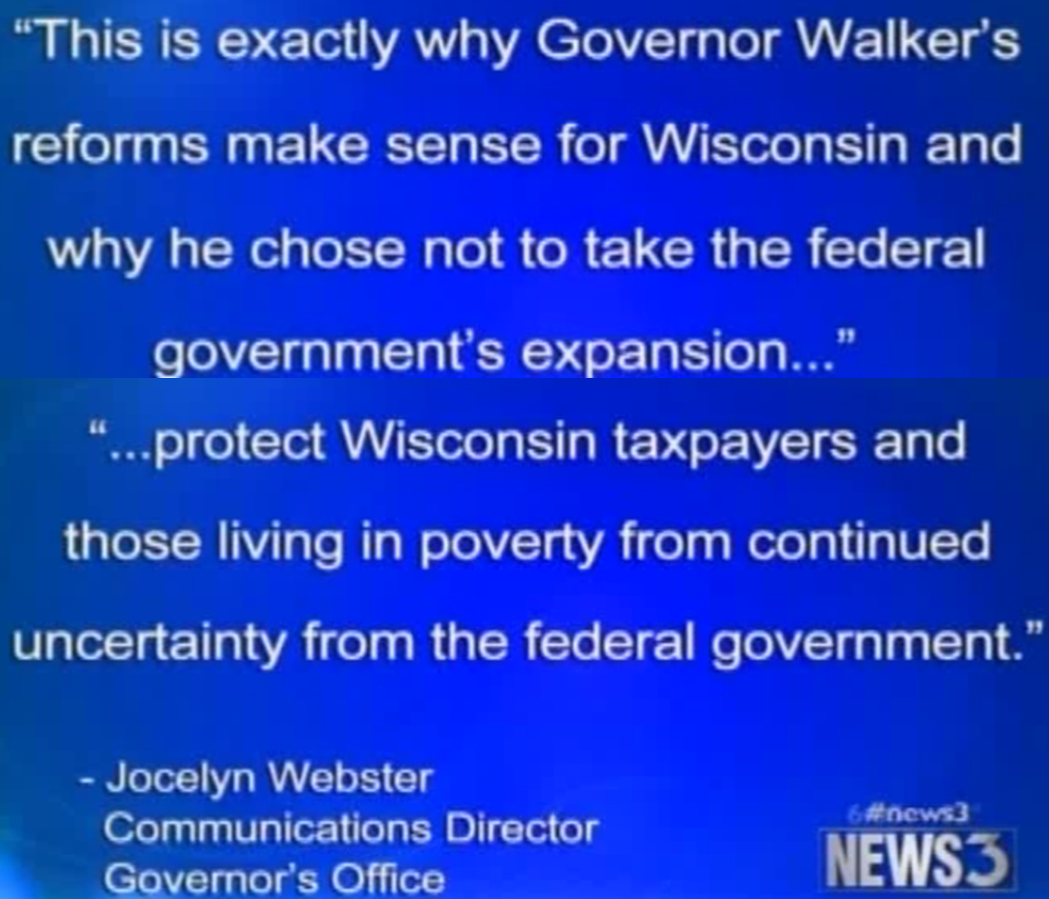 It was Walker's completely disconnected response pictured here, that should concern Wisconsinites; it had nothing to do with today's ruling about the exchanges, but only referred to expanding Medicaid. Another words, Walker's got nothing, no solutions, no concern over those he pushed into the exchanges and a convenient way to avoid responsibility.


The Wisconsin Budget Project: Why did Wisconsin cut BadgerCare eligibility in half for parents, based on reliance on federal funding to subsidize the federal health insurance Marketplace?

Thanks to a ruling today by a subset of the DC Circuit Court of Appeals … two of the three judges participating in that ruling concluded that federal subsidies for the health insurance Marketplace can only go to people in states that set up their own Marketplaces … considering that 90% of the Wisconsinites who have purchased plans from the federal Marketplace are receiving federal subsidies, and those subsidies cover 74% of the cost of Marketplace premiums … The stakes are even higher in Wisconsin because Wisconsin lawmakers decided to cut in half the BadgerCare income ceiling for parents. About 70,000 fewer parents are now enrolled in BadgerCare and it was assumed by state policymakers that most of those adults would move into subsidized Marketplace plans.

Wisconsin policymakers express concerns about taking federal funding to expand BadgerCare … Ironically, those policymakers pushed through an alternative plan that costs state taxpayers more, covers fewer people in BadgerCare, and relies on federal Marketplace subsidies that might be at greater risk than Medicaid funding.