It was a ridiculous lawsuit, but Dumb Ron Johnson had time on his side to get as much traction out of his ObamaCare attack as he possibly could, and he got it. Tea party low information voters were impressed with Johnson's suit and challenge to the imperial president.


A federal judge Monday dismissed U.S. Sen. Ron Johnson's suit over an Obama administration ruling on the Affordable Care Act, finding he had failed to demonstrate any true harm he faced from the decision.

In what is the dumbest reason yet to impress the judge: 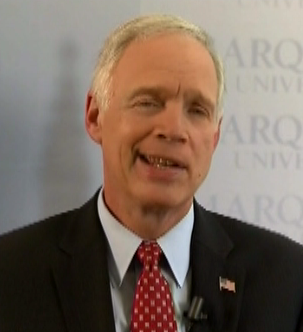 WisPolitics: Johnson argued the ruling hurts his reputation with his constituents by requiring him to participate in an "illegal" scheme, Judge William Griesbach ruled Johnson and his aide lacked standing to file the suit, finding much of the injuries the lawmaker claimed were speculative.

Illegal Scheme? Who said? The judges statement could also be applied party wide:

The judge also rejected Johnson's argument that he was being required to participate in something he found illegal. Griesbach noted no court had yet found the administration's rule illegal and the provision does not require any member of Congress to act. Simply believing the provision is illegal was not "enough to create standing because that would open the door to any uninjured party who had a generalized grievance with a government regulation. Under such an approach, there would be no principled limit on standing because a plaintiff need only allege a belief that the challenged regulation is illegal," the judge wrote.