Falling behind the other GOP “leaders,” Scott Walker decides to Repeal Common Core!!!

I'm beyond furious over the purely political gamesmanship of Scott Walker and his Republican pirates. As a parent of a 12 and 15 year old, I have seen the wonders and amazing progress my kids have made based on Common Core.

School districts are now being told the estimated $25 million local taxpayers paid in since 2010 will be tossed, so Walker can shore up his base of low information voters here and nationwide. I'm wondering how many parents like me are fuming over this partisan campaign tactic. Using our kids for his reelected is pathetic: 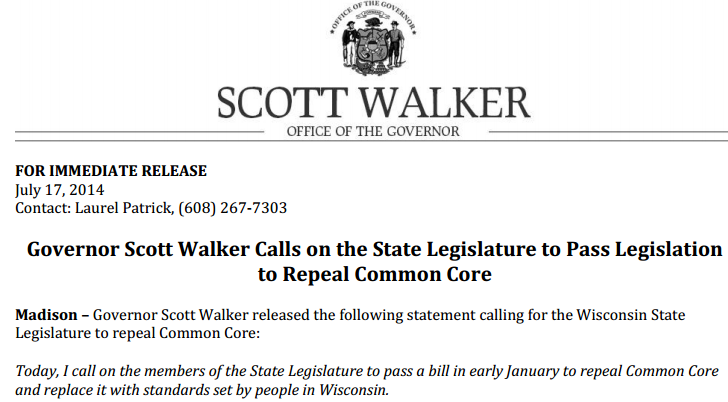 jsonline: Joe Zepecki, campaign spokesman for gubernatorial candidate Mary Burke, said Thursday's release "is a desperate election year move by a career politician to shore up his extreme right wing base. The transparency of the political nature of this move could not be clearer. The legislature isn't in session. He offers zero explanation for why wants to undermine efforts to improve our educational standards from 38th in the country and zero plan for moving forward. Why the sudden change of course after 3 years of DPI working on implementing these standards? "

For starters, Common Core doesn't take away local control. What would really take local control away is Walker's repeal of Common Core and the new set of standards crafted by big government politicians in Madison, instead of local and national educators.

The Beloit Daily News wrote this editorial today, even before Walker's announcement:


Some (governors) are even beginning to sing from the hymnal, suggesting it’s all some kind of federal plot to steal children’s brains. Nonsense.

Keep in mind the pump was primed by American concerns the country’s students were not keeping up globally, and that improving competitiveness would require more standards and more consistency. That’s why business came to the table, to push harder for economic primacy.

There’s an old saying in the private sector: What gets measured gets done. It is impossible to uphold standards without measuring progress and performance, a process that creates databases about children in school. This is a work in progress, and that’s a good thing.

What should raise hackles, though, is the constant negative drumbeat by radical politicians claiming Common Core is some kind of plot against America and its children. For Heaven’s sake, that’s ridiculous.

Ask yourself: A broad coalition of smart people set the Common Core process in motion. That doesn’t mean it is perfect. But would you rather your kids and the standards they learn by became the playground of politicians, subject to the wild ideological swings of that realm? Not us. Common Core is a good start, based on a reasonable goal. As Bill Clinton once said in a different context, “mend it, don’t end it.”