The Republican Wisconsin Legislature, in an unabashed display of outright Racism, Repealing Ban on Race-Based Mascots.

Shoving their November election win in the face of Democratic and independent voters, Republicans are taking one party rule to its racist limit. 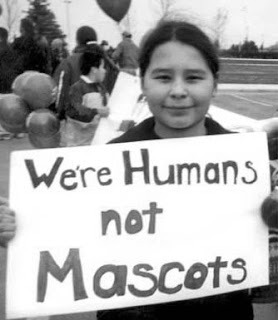 Take note of the sponsors of this racist appeal to the Republican base in Wisconsin, and the social agenda that ignores the public will to do away with 19th century racial references.

Livinglakecountry: A bill draft to appeal and amend statutes relating to the use of race-based nicknames, logos, mascots and team names by school boards will be shared with State legislators for cosponsorship on Monday, Jan. 31. The bill draft was authored by State Sen. Mary Lazich and Neal Kedzie, and State Rep. Andre Jacque and Steve Nass. "I am confident that if the bill arrives on Governor Scott Walker's desk, he will sign it into law," said Nass in the letter.