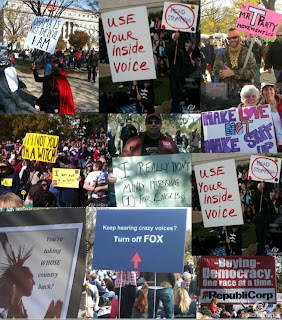 Remember when Conservatives vilified the President when he encouragement students to do well and graduate?
He was and accused of brainwashing students with his yearly televised presentation?
Guess who’s trying to get into our schools and brainwash the kids?


Rawstory: Tea party groups have succeeded in reversing nationally praised school integration policies in Raleigh, North Carolina, decrying the longstanding system as one of social engineering. "Say no to the social engineers!" was one of their slogans.

Can they really politicize our schools with conservative clap trap while screaming about liberal indoctrination? Sure.


Thinkprogress: Tennessee tea party activists presented state legislators yesterday with a list of “demands” for the 2011 legislative session, including, “educating students [about] the truth about America.” “Neglect and outright ill will have distorted the teaching of the history and character of the United States,” according to a document the two dozen activists distributed to reporters. “We seek to compel the teaching of students in Tennessee the truth regarding the history of our nation and the nature of its government.”

Their “truth” can be taught, but actual history is liberal, and can’t be. It’s as simple as their minds.


The activists said they want a focus on the “progress” the Founders and “the majority of citizens” made, to the exclusion of supposedly “made-up criticism” about slavery and the treatment of Native Americans: Fayette County attorney Hal Rounds, the group’s lead spokesman during the news conference, said the group wants to address “an awful lot of made-up criticism about, for instance, the founders intruding on the Indians or having slaves or being hypocrites in one way or another.” It’s unclear what these activists think is “made-up” about the very real history of slavery in America or the very real intrusion on Native American lands by early American settlers.