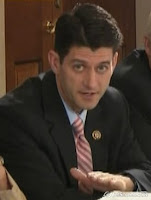 This blog could have easily been renamed, "Hey look, Paul Ryan's gonna fiscally destroy the country." I've tried like hell to expose this carnival barking conservative extremist. The Ryan legend has gotten so out of whack the GOP couldn't wait to give him the duty of responding to the presidents state of the union address. Well, no more, it seems almost everybody's caught on to this Ayn Rand wanna-be. Check out the EPI's breakdown as well:

Matt Miller, Washington Post: Imagine that President Obama said Tuesday night that it was time to get America's fiscal house in order and then proposed a plan that would not balance the budget until the 2060s - while adding more than $62 trillion to the national debt between now and then. Can anyone imagine Republicans hailing Obama as a "visionary fiscal conservative"? The idea is absurd.

But Republicans do hail House Budget Committee Chairman Paul Ryan as a "visionary fiscal conservative," even though it is Ryan's "Roadmap for America's Future" that I've described.


According to the Congressional Budget Office, Ryan's plan would result in annual deficits of between 3.5 and 4.5 percent of GDP between now and somewhere after 2040, with a balanced budget coming only around 2063. This would add at least $62 trillion to the national debt over the period. (My estimate is conservative mostly because the independent Tax Policy Center says Ryan's tax reforms would produce far less revenue than Ryan required the CBO to assume.)

Ryan doesn't dispute these basic facts (though I believe this is the first time his actual debt numbers have been called out). When I asked him at a recent National Press Club event how he could put out a plan that didn't balance the budget for decades and added trillions to the debt, and still call himself a "fiscal conservative," he offered an evasive digression on how this just shows how tough the demographic challenge is.

Understood properly, Ryan's debt-soaked "Roadmap" is not the threat liberals perceive but instead fresh proof of the inevitability of higher taxes as the boomers age. If Ryan publicly accepts this reality in his new leadership role, he'll hasten bipartisan progress toward budget fixes that blend long-term spending reductions with tax increases. If he denies it - well, then, sorry, Paul, you'll just have to live with being the $62 trillion man.

Here's Rep. Jan Schakowski on the horrors of Ryan's plan, and the backward movement of his entire party that's seems to have forgotten jobs, jobs, jobs.