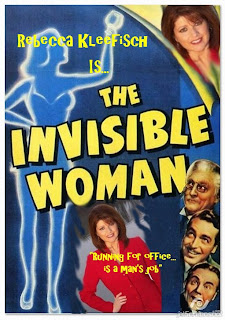 Air-headed Lt. Gov. Rebecca Kleefisch is another historically ignorant conservative woman, and victim, of a press that just can't stop picking on and criticizing their own idiotic public statements.

A few weeks back Liberal radio host Sly made a few "theatrically" descriptive comments, one he apologized for, about poor picked on Becky. Keeping in mind this happened weeks ago, Kleefisch decided to exploit her victim hood all over again, for Sean Hannity's frightening Fox News audience.

In other blog posts, I've covered her distaste for poor people with TV's, jokes about climate change and her campaign decision not to appear in public. In front of a national audience, Kleefisch succeeded in proving one thing; Republican women politicians are almost always attractive:

Rebecca Kleefisch: "Liberals embrace women as a group that sometimes they feel they take ownership of. And there are some of us who don't believe in the same value system that a lot of these liberal groups have. We're independent thinkers, we have traditional values, and we stand on our own merits."

Huh? Beside having a bad case of conservative projection, Kleefisch's rambling nonsensical portrayal of liberal men and women is historically wrong. What is it about conservative political womens lack of historical context and accuracy? I guess women's LIBERATION, opposed by conservative anti-feminist leaders like Phyllis Schlafly, never really happened. And as a voting block, liberal women aren't taken for granted or "ownership of" by liberal politicians. If that were true, then male Republican politicians would be taking ownership of conservative women who will voting their party affiliation.

More importantly, Kleefisch is a hypocrite for opposing health care for average Americans and mis-characterizing it as some kind of government takeover, while bragging about the great care she received for her cancer treatments all paid for by the taxpayer. She is after all getting her own government provided health benefits through her husband and fellow GOP legislator.
Posted by John Peterson, Democurmudgeon at 1/28/2011 12:36:00 AM