Looks like Bass Pro Shops, a Missouri-based retailer, had the sense to say, "we don't build on wetlands." 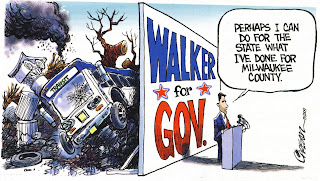 In an OMG moment, Gov. Walker and Republicans were left looking like corporate whores willing to trash Wisconsin’s environment, just to fulfill a hyperbolic campaign pledge to serve business.

jsonline: Gov. Scott Walker said Friday he wants the Legislature to quickly pass a bill that would allow a developer to build on a wetland near Lambeau Field, even as the retailer that was envisioned as an anchor for the development announced it would not build on a wetland.

Walker's comments came just after Bass Pro Shops issued a statement saying the company would not build on a wetland.

Company spokesman Larry Whiteley said "We were unaware of any wetlands issues and have not and will not be in favor of doing anything to harm wetlands wherever they might be." Whiteley declined to say whether the company no longer had an interest in Green Bay, saying only "we don't build on wetlands."

In what would seem outrageous to most Americans,

The Republican governor wrote a bill this month that would allow a developer to sidestep standard water quality reviews by the Department of Natural Resources. The bill cleared an Assembly committee Thursday. The bill angered environmentalists and conservation groups, who said it amounted to legislation that helped just one business.

On Friday, Sen. Robert Cowles (R-Allouez) said that he recently toured the property.

"It shouldn't even be an issue," Cowles said. "This is no wetland. I walked the site and I thought, 'this whole hubbub is about this site?' Come on!"

Made to look like the biggest a-hole, Gov. Walker tried to save face by ignoring Bass Pro’s scorching indictment of his pro-business sellout.

Walker told reporters Friday he still wants to move forward with the bill despite Bass Pro Shops' position. "I think if we still had swift action I think they'd reconsider," he said. "But I think it's important to send a message with this particular piece of legislation that things have changed."

What a message, and complete tone deafness over Bass Pro's responsible take on the environment, “we don’t build on wetlands.”

Summing it up for me:

The Wisconsin Wetlands Association said in a statement that Walker and Bergstrom "focused on using political capital to circumvent the law. Yet neither of them considered the environmental ethic and business practices of the company that they wanted to bring to Green Bay."

UPDATE: Jan. 29, 2011-Acting as if Bass Pro Shops didn't embarrass state Republicans for their irresponsible legislative actions to allow Bass to build on a wetland, something Bass said was profoundly wrong:


Rep. Dean Kaufert [R – Neenah] criticized the actions of some state elected officials and groups that have led to the loss of hundreds of new jobs in Wisconsin following the announcement by Bass Pro Shops that they had dropped discussions to locate a new store near Lambeau Field in Green Bay.

“This is a perfect example of the anti-business sentiment displayed by some state officials in Wisconsin in the past that has hurt job creation in our state and hampered the attraction of new businesses to Wisconsin."

It wasn't anti-business forces, it was Bass Pro Shops, A BUSINESS who made the responsible decision to save the environment. Nice try Kaufert.