Are they kidding? House GOP’s next step after Vote on ObamaCare; Abortion…again. What happened to Jobs, jobs, jobs? 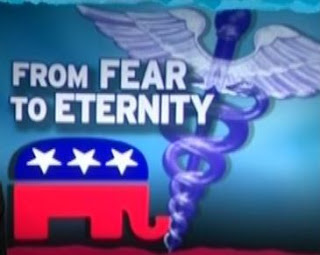 Seems we already had this empty debate, but now it's back, thanks to the Republican majority and their wedge issue bag of tricks. See if you too can be distracted:

Houston Chronicle: A day after their vote to repeal President Barack Obama's landmark health care law, House Republicans moved Thursday to put their own stamp on the issue, starting with the volatile topic of abortion. The highly charged issue nearly scuttled passage of the health care law last year. The move to reopen that debate is part of an emerging GOP strategy to attack in the health care law piece-by-piece and promote ideas of their own.

Promoting what ideas? Instead of making health care even better, Republicans are looking for ways to criticize it. For instance:

CBS: The new Energy and Commerce Chairman Fred Upton, R-Mich., said one of the first efforts his committee will take is to allow individuals to purchase health insurance across state lines.

Rep. Dave Camp, R-Mich., said that his Ways and Means Committee will hold a hearing next week "solely dedicated to examining the economic and regulatory burdens imposed by the Democrats' health care law."

And the chairman of the House Judiciary Committee, Rep. Lamar Smith, R-Texas, wasted no time by convening a hearing Thursday morning on medical liability reform.

What mistake did the Democrats make trying to cover every American in country?

Republicans argue that Democrats focused too much on expanding coverage to everyone when they crafted health care legislation.

Simpleton statements like this make you wonder if they really know what they’re doing (they don't):

"Obviously if we can get costs down, the opportunity to afford health care goes up," Camp said. The chairmen avoided giving numbers, however, on how many more people could afford health insurance under their plan.

Their last plan didn’t spend as much money as the Democratic plan, but then…