Simple Solution not an issue in Arizona to eliminate deficit; a tax increase of some kind. Simple Problem; Republican politics. 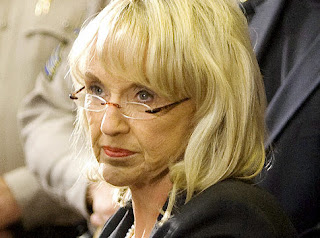 Here’s a look at the problem Arizona Republicans have created for themselves, stemming from their pledge to never raise taxes. Keep in mind, that pledge meant little to voters, when they "affirmed (the) a temporary sales-tax hike in May." The public has more sense and courage than GOP politicians:

Gov. Jan Brewer’s $8.9 billion plan closes a deficit that she projects at $1.15 billion for fiscal 2012 and does it without raising general taxes. But her plan hinges on the federal government's permission to drop 280,000 people from state health-care rolls…

She wants a (2 year) waiver that would allow Arizona to drop coverage of childless adults and curb funding to some low-income parents, and blind and disabled people.

If it's not granted, the consequences would be severe, said John Arnold, director of the Governor's Office of Strategic Planning and Budgeting. "It's really cataclysmic if we don't get the waiver," Arnold said.

The governor has no backup plan, he said.

…lawmakers have broached alternatives, such as backing out of Medicaid altogether or shifting the burden of health care to the 15 counties.

Not only would 280,000 people lose coverage, but hospitals could take a hit of $540 million from lost business, harming the overall economy, said Laurie Liles, chief executive officer of the Arizona Hospital and Healthcare Association. "It will increase the uncompensated care hospitals already provide, threaten the financial well-being of hospitals and force them to make very difficult decisions about services and cost-shifting to commercial health plans," she said.

Some kind of tax increase, anything?

The budget proposes a $170 million cut to the state universities, a loss of 20 percent in state funding. Community colleges would lose $73 million, a 55 percent cut in the state's contribution.


Prisons are one of the few areas recommended for an increase: an extra $8.4 million to hire 100 new correctional officers next year, to be followed by 200 more over the next two years. She also calls for a $50 million bond to cover "critical needs" at the state's 10 prison complexes. Brewer's plan is silent on emergency funding for certain medical transplants that Democrats and others have pushed.