Republicans Wiping the Slate Clean of Liberal Influences. One Party Rule Anyone?

It's odd to me that no one has noticed the underlying message of the Republican Party: One party rule.

In Wisconsin, the GOP has rejected, discouraged and stopped all green economic development. And now according to a list of targeted cuts by the House Republican Study Committee, the GOP is attempting to erase the Democratic Parties contribution to our American way of life. Good-bye to our cultural history and the arts, just to name a few.

Check it out here. Pictured here is just a sample. 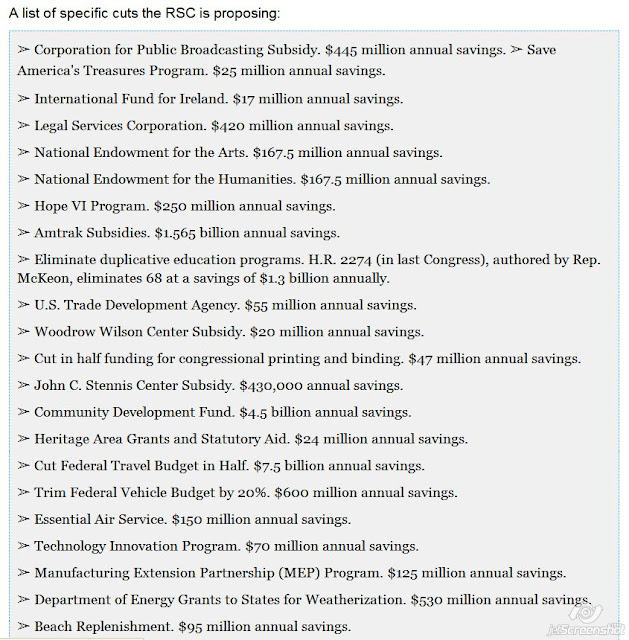 Ezra Klein had this analysis:


That fight kicked off yesterday when the Republican Study Committee -- which represents two-thirds of House Republicans, including almost 75 freshman -- brought out a package of cuts that'd slash $100 billion from non-defense discretionary spending and bring spending back to 2006 levels in the years after that. But reading their legislation, you can see why more experienced members of their party might balk: $30 billion in savings comes from immediately selling off Fannie Mae and Freddie Mac, which would potentially throw a weak housing market into total chaos.

Another $16 billion comes from repealing the help the federal government is giving states to handle Medicaid costs, which would potentially send a couple of states that are already teetering on the edge of bankruptcy right over the cliff. Amtrak would lose pretty much its entire federal subsidy, as would the Corporation for Public Broadcasting and the National Endowment for the Arts. Funding for high-speed rail is eliminated, and so too is more than $40 billion in stimulus funds, most of which are obligated to projects that have already begun.

For all that, this is a healthy document: It shows what very deep cuts in spending would actually look like. Democrats, I imagine, will be quite interested in debating it. Whether or not Republican leadership will be as enthusiastic remains to be seen.