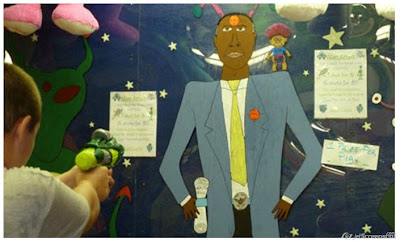 Jaw dropping hardly describes the latest offering at a carnival of horror.

The head of an eastern Pennsylvania amusement company, Irvin Good Jr., has yanked a carnival game in which players shot foam darts at an image resembling President Barack Obama. Good said his company, Goodtime Amusements, won't offer the game again. Good said that he voted for Obama and that the game wasn't meant to encourage violence against the president. He said the image was conceived and painted by a staffer.

"It was just a big, big mistake in judgment, and I feel sorry about it," he told The Associated Press. "I can't take it back, but I can try to make it better."

Just how bad was the game? I hope you’re sitting down.

The game, dubbed "Alien Attack," featured a large painted image of a black man wearing a belt buckle with the presidential seal and holding a scroll labeled "Health Bill." Players could win prizes such as stuffed animals by hitting targets on the image's head and heart.

Kathryn Chapman, 55, of Medford, Mass., spotted the game and complained to Good. "What is the message you are sending kids, that if your views don't agree with somebody else's, shoot them? I just found it incredibly disrespectful and violent," Chapman said Wednesday. "And this was the president, the highest office in the country. It was absolutely appalling."

The Obama-themed game had been running since April. Good said he had received one other complaint about it before Chapman's.

Any wonder 42 percent of Americans believe Obama is American?